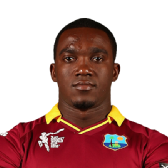 Although they comfortably lost by five wickets, Zimbabwe's young team will take great heart from their performance against the West Indies in the first of seven one-dayers at Antigua. On a two-paced pitch, chasing just 152, the West Indies made hard work of their task and rarely looked in complete control of proceedings.

That they were made to struggle was down to Zimbabwe's young bowlers' control, and the energetic performance of their fielders. As early as the sixth ball of their innings, the West Indies lost their opener, Runako Morton, who carelessly drove one from Ed Rainsford straight to second slip. It was just the start they needed.

Rainsford bowled intelligently. Using his height to good effect, he generated bounce - on what was a difficult pitch to bat all day - causing Chris Gayle several anxious moments. However, his and his team-mates' inexperience told. The left-hand right-hand combination of Gayle and Ramnaresh Sarwan upset their lines, prompting Sarwan to punish Rainsford for several fours.

After putting on 37 with a subdued Gayle, from 10 turgid overs, Sarwan was caught inches short going for a quick single; the running was lazy, if a little complacent, and handed Zimbabwe a fortunate wicket. Gayle batted with curious restraint and only briefly did he threaten to open his broad shoulders.

He looked to be regaining his touch and power when he planted Prosper Utseya, the off-spinner, straight on top of the Richie Richardson stand at long-on - a remarkable one-handed shot of immense power. It appeared he and Denesh Ramdin, promoted ahead of his captain Brian Lara, were easing West Indies to victory until Gayle attempted to hit Utseya beyond the same stand and into the sea. Utseya, not afraid to toss it up, cleverly beat him in the air and had him caught at square leg.

Worse was to come. Shivnarine Chanderpaul, who was relieved of the captaincy last week, continued his poor run of form when he tried to cut Utseya. Soon after, the same bowler should have had Lara caught at deep midwicket when, inexplicably, he tried to pull one wide of the off-stump. The three fielders converged in a potentially disastrous triangle, but the ball somehow evaded each of them. That blemish aside, Lara batted with his customary brilliance to late-cut the spinners and nudge singles with ease.

At the other end, Ramdin - a compact, neat and correct batsman - grew in confidence until, with just 31 runs needed to win, he decided to late-cut a half-volley and was bowled by Utseya. It was a dreadful, lackadaisical shot.

If their batting was lacklustre, the West Indies' bowling performance was similarly uninspiring. Whereas Zimbabwe looked sharp in the field, the hosts lacked intent and spark. After removing Piet Rinke in the second over, the opening bowlers - Fidel Edwards and Jerome Taylor - lost their ferocity and didn't look like a side determined to take 10 wickets.

Terry Duffin, the Zimbabwe captain, then batted diligently for his 26, and put on a vital 64 runs with Justice Chibhabha, who made a very impressive 55. Though the pair batted well, rarely did they break into a trot which said more of their inexperience than anything else.

Their wickets marked a dramatic collapse in which Zimbabwe lost 7 for 30 as the West Indies bowlers, Gayle and Dwayne Bravo in particular, found their lengths. But it was the batsmen's inexperience that told. Panic set in during the final ten overs, and though they reached the milestone of 150, it was never likely to trouble the West Indies.

Lara, clearly fed up with the injudicious strokeplay of his team-mates, clobbered a couple of late boundaries, including a huge six to win the game. It was a disappointing effort from the home side, and an encouraging one from Zimbabwe who can take heart not only for batting out fifty overs, but for making the West Indies work hard to reach what was a paltry total.

How they were out

Chris Gayle b Utseya (71 for 3)
Ball dipped and turned, edging it to backward point

Ryan Higgins c Bravo b Gayle 0 (142 for 8)
Thick edge to first slip who took it neatly, low to his right