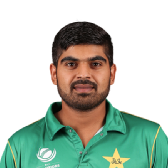 An inspired, backs-to-the-wall performance from Pakistan knocked South Africa out of the 2019 World Cup.

Pakistan let sense prevail in their selections for this game, and a re-jigged XI collected a vital, 49-run victory. Haris Sohail, drafted in place of Shoaib Malik, showed just what Pakistan had been missing by blasting 89 of the most sublimely-timed runs so far witnessed in this tournament. His innings added further impetus after an 81-run opening stand between Imam-ul-Haq and Fakhar Zaman, gluing Pakistan's middle together alongside Babar Azam, who contributed 69. Haris then added 71 with Imad Wasim (with Imad, contributing just 23, mostly at the other end), and thanks to his nine fours and three sixes, Pakistan were able to take 91 from the last 10 and soar to 308 for 7.

South Africa have never successfully chased 300-plus in a World Cup: the highest total they've ever overhauled is India's 296 in Nagpur in 2011. And they haven't chased a 300-plus target in any ODI in nearly three years, the last time being against Australia in Durban in October 2016.

Mohammad Amir and Shadab Khan struck repeatedly to overcome their top order and ensure this would not be a historic occasion for South Africa, and a reverse-swinging, low-armed Wahab Riaz then did as he does best, skittling the lower order at the death with the required rate skyrocketing.

Amir finished with 2 for 49, taking his World Cup tally to 15 dismissals, which is the combined haul of Jofra Archer and Mitchell Starc, who have both played one more game than him. He has almost as many as his team-mates have taken in total, and more than anyone else.

While it was Amir who made the first decision, troubling Hashim Amla's front pad with a first-over indipper, it was Shadab who pressed the issue with two vital strikes in the space of four overs: first he had a slogging Quinton de Kock caught at midwicket, just shy of a third World Cup fifty, and then he bowled a clueless Aiden Markram, whose struggles against quality spin continued.

When Markram fell, South Africa were 103 for 3, needing well over seven an over, and Shadab had 2 for 17, including a wicket maiden. He ended with 3 for 50, having also had an increasingly desperate Rassie van der Dussen caught by Hafeez off a slogged top edge - his best figures of the tournament, and numbers which marked a timely turnaround. Before today, Shadab was averaging a whopping 53.9 in ODIs this year, and Pakistan's spinners were leaking 75.3 runs per wicket in the middle overs of this World Cup, comfortably the worst for any spin unit. But on a tufty, dry Lord's surface, both he and Imad found encouragement, and combined for 3 for 98 from 20.

South Africa found no respite at the other end. The spirit went out of their chase when Faf du Plessis' last stand was cut short on 63 by Amir. He had scrapped his way to fifty, but the required rate was nearing 8.5 thanks to the good work of the spinners, and something had to give. Sarfaraz brought Amir back, and with his third ball he ensured South Africa's captain would not go down with his ship, inducing a steepling top edge that just about touched the gloomy clouds that had settled in over St John's Wood before plummeting back down to be easily pouched by Sarfaraz.

David Miller, having tweaked his hamstring in the field earlier, hobbled to the crease in a cacophany of sound as Pakistan's fans, who packed the stands, sensed victory. He and van der Dussen swung gamely to add another 53 for the fifth wicket, but with every over the asking rate climbed.

With 15 overs to go and South Africa needing almost ten an over, all Pakistan had to do was stick to the basics, keep it tight, and let scoreboard pressure do the rest. But Pakistan aren't a team who like to make things simple for themselves, and several lapses in the field repeatedly let South Africa off the hook and back into the game. In total, no less than six chances were grassed as South Africa went down swinging - yet more evidence that Pakistan's standards in the field have dipped since Steve Rixon's departure.

But today, there was enough brilliance with the ball to make up for it. Shadab saw the back of van der Dussen, Miller missed a swipe at Shaheen Afridi and was bowled, and Wahab did the business to scythe through the lower order, Andile Phehlukwayo playing a lone hand with 46 not out. South Africa's campaign whimpered to a close, and Pakistan's was kept alive with a vital win.

There was also, for a change, plenty of brilliant batting to go around. Pakistan's batting has lacked a century-maker in this World Cup - unlike the teams that currently occupy the top four points on the table - and no one made a hundred today either, but a far more fluent performance from the top order ultimately gave the bowlers the sort of total they need to put the squeeze on in the second innings.

Imam kicked things off at a good lick, showing that his cover driving is in excellent working order and outscoring Fakhar Zaman in the early exchanges. Though neither reached fifty, Imran Tahir rolling back the years to dismiss both of them for 44 (including a remarkable one-handed stunner off his own bowling), Babar Azam was soon ticking, and helped to weather the loss of Mohammad Hafeez for 20.

But the innings really belonged to Haris, who walked to the crease with intent and batted with the same vim, bursting out of the blocks with two fours and a six in his first 10 balls. While Babar raised a mid-tempo, 61-ball fifty at the other end, Haris showed he had all the shots. Crisp through the off side, and particularly behind point, he was increasingly brutal to leg. A ramped uppercut brought him a 38-ball fifty - his first in World Cup cricket - and he just kept accelerating. A second six was chipped over Duminy's head at long off, while a third was slugged over midwicket.

Ngidi pulled things back a little with an exemplary final over, dismissing Wahab with his first ball and Haris with his fifth, but by then the damage had been done. Pakistan had a total which inspired them to believe, while South Africa's chase lacked belief almost throughout.