Two words, part plea, part dare, from Ottis Gibson, the South Africa coach, were all that it took to sum up what a shame it has been for a riveting Test series to have been overshadowed by all the ugliness that has taken place between balls. Gibson was taking his place in the firing line after Mohammed Moosajee, the South Africa manager, had read out a statement and answered questions about the reduction of Kagiso Rabada's sentence, which would allow the world's top-ranked bowler to play in the decisive end-of-series Tests.

And to add a touch of poignancy, we were all in a cricket ground with the prettiest of views, and from where he sat in the Newlands press box, Gibson was facing the majestic beauty of Table Mountain.

Four people spoke within a couple of hours of the outcome of the hearing that overturned Rabada's ban, and the varied sentiments expressed by them captured the many shades of this unfortunate business. Nathan Lyon, the Australia spinner, was cautious and stoic. Moosajee, who had been in the front line of the battle to get Rabada acquitted, struck notes of triumph and vindication. For Gibson, it was plain relief to have his main weapon back. And from Steven Smith, the Australia captain, and the dismissed batsman against whom Radada had earlier been charged with making deliberate and inappropriate contact, and who had not been called up for evidence at the appeal hearing, there was undisguised indignation.

Professional cricketers are good at moving on to cricket, and that is what the series desperately needs. From a narrower perspective, and for the local fans, to have had the best bowler in the series sitting on the bench would have been a shame. Newlands is expected to be packed for this Test; the best versus the best would be a treat. There is now added edge to Smith v Rabada.

"The biggest question of all is: what kind of a game does cricket want to be? It's a question that it has wrestled with since inception"

For cricket, it leaves many questions hanging over its struggle to enforce discipline and a code of conduct. The Rabada-Smith incident was merely a manifestation of the underlying theme of a series that has been ill-tempered and mean-spirited, and has once again blurred the boundaries between competitive aggression and downright nastiness in cricket.

Will this now, as Smith asked, set a precedent and embolden bowlers to charge down towards batsmen they have just dismissed? Or will it be, as the South African camp has suggested, a final reminder for Rabada, a serial offender, about the consequences of his post-dismissal melt-downs?

Where does it leave the role of the match referee and umpires? It was the umpires who brought the charge against Rabada, and the referee pronounced the sentence after a disciplinary hearing. It is just as well Jeff Crowe was scheduled to leave the series midway, because it isn't hard to imagine his awkwardness had he stayed involved. If Crowe erred, it was in declaring the contact deliberate, for while it was clearly inappropriate for Rabada to be in close proximity with the batsman, not even a million viewings of the footage would establish the deliberateness of the contact. And once lawyers got involved, the charge would have been harder to prove.

The bigger, and more lingering, questions would be about the definition of what constitutes a violation and over uniformity and consistency in the application of the laws. Even as the Rabada matter was pending hearing, ugliness broke out in Sri Lanka. A member of Bangladesh squad was shoved on the field, the Bangladesh captain nearly took his batsmen off the field (Sunil Gavaskar has never been able to live down a similar act over 35 years ago), a dressing room was vandalised, and a snake dance was performed to celebrate a win. Was it because it was a game in a relatively low-profile T20 tournament between two relatively low-profile teams that two players were handed out one demerit point each as a result? 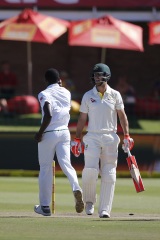 Let's also consider the reverse. Was it because of the high profile of the players involved and the clout of their boards that neither Smith nor Virat Kohli received a sanction for their roles in the ugliness that marred the Bangalore Test last year? Smith's explanation that his seeking guidance from the dressing room for a DRS review was a brain fade was accepted, and Kohli wasn't asked to explain or prove his charge that Australia had been abusing the review process systematically.

However, the biggest question of all is: what kind of a game does cricket want to be? It's a question that it has wrestled with since inception. Gamesmanship has been institutionalised within what was labelled the gentleman's game. Nowhere is this contradiction more apparent than in the dictum "hard and fair", which has been drilled into cricket's consciousness by the aura of Australian success, with what's hard and what's fair always open to interpretation.

In these matters, cricket lacks the clarity of football, where fouls and hard tackles are committed and punished without invoking morality or that imperceptible concept of the spirit of the game. Or baseball, another game involving a hard ball being hurled with menace at the batter, where open brawls are not uncommon, and result in punitive action but no stigma. At the other end of the spectrum is tennis, an intensely competitive individual sport that tolerates no transgressions in conduct, and where players can be docked points, games or matches on the spot by match officials.

There are no easy answers. But cricket can make a beginning by getting a consensus on what constitutes an offence - and that can't be based on what the mics pick up and what gets aired. Ugly gesturing from bowlers after they have dismissed a batsman make for a horrid sight, but how is it any worse than a gaggle of fielders questioning the parentage of a batsman in the name of testing his character?

And once the terms are laid down, cricket could consider taking a leaf from football and tennis to empower the umpires, the people closest to the action, with decision-making powers. Yes, there will be subjectivity, and some umpires will be stricter than others, and there will periodically be outrage among fans, but there will be no ambiguity about the process, and no drawn-out system of hearings and appeals. Hand-wringing while hedging on the edges will only do so much. One irreversible red card has the potential to stop a hundred transgressions.