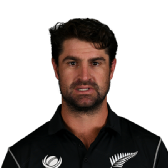 5.35pm: Right, that's it from us for today/tonight. Matt's report is in the slot, just asking for you to see it away... There are two more games to come in this series, and we'll be back for more from Napier on Friday. Thanks for your contribs, until then, it's ta ra from myself and Matt!

5.30pm: Time for the presentations, starting with Man of the Match Colin de Grandhomme: "Yeah, enjoying number four, hit it well in Sri Lanka and it seemed to carry on at home. The earlier you get in, it's not nice for the openers but it's nice for me and it gives you more access to the boundaries."

England captain Eoin Morgan: "Think that's one that got away, we were in control for the whole chase until we were three or four down, probably that's a lack of experience but the guys need to get more games into them at this level. But certainly that's one that slipped away. Everything is about playing smart, aggressive cricket, and new guys coming in. There were a lot of positives but it's a must-win game in Napier now. Tom Curran bowled really well at the death and Sam Curran has made big strides this series."

New Zealand captain Tim Southee: "It showed that if we could keep taking wickets, it would get tougher and tougher for the news guys coming in. I think with Morgan going they were nicely placed but we kept chipping away. Great to see Colin come out and get a score. It's nice to win game like that, could have gone either way at the halfway mark."

5.20pm: Well, it did go the full Nelson in the end, as New Zealand applied a chokehold on England's chase. ESPNcricinfo's forecaster had them at a 90% chance just before Eoin Morgan got out - but that sparked a collapse of 5 for 10 in three overs, as the innings suddenly entered a death-overs spiral. Dawid Malan was unhappy with his manner of dismissal, having played nicely for 55 off 34, but James Vince's was perhaps more damaging, leaving two new batsmen at the crease with three overs to go. Credit to Tim Southee, too, who kept going with his frontline quicks before slipping in an over from Sodhi with the tail to bowl at and then closing things out himself. Victory puts New Zealand 2-1 up in the series, ahead of the fourth match of five, up on the north island in Napier.

19.6
2
Southee to TK Curran, 2 runs, short, wide and slapped up and over cover point for a couple more - but it won't be enough, New Zealand win by 14 runs after an excellent display of bowling at the death
19.5
1
Southee to Mahmood, 1 run, short ball outside off, Mahmood pulls it out towards deep midwicket for one

Southee ensuring against mishap. Nothing to see here

19.4
0
Southee to Mahmood, no run, low full toss, swatted straight back to the bowler in his follow through

"Tickner and Ferguson with two very differing displays, but identical figures!" notes William G. "You love to see it." Aye, both were good in their own way

Tom Curran on strike, England needing 19 from Tim Southee's final over. Is there a Brathwaite finish in this one?