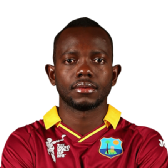 Shane Shillingford took his good form from the Test series against Zimbabwe into the Regional Four Day Competition, taking 12 wicketsto set up a 216-run win for Windward Islands against Barbados. Shillingford, who took 19 wickets in two Tests at an average of 10.52, bowled well in both innings to help dismiss Barbados for 64 and 205. The win puts Windwards at the top of the points table with 48 points.

Batting first, Windwards managed 184 in their first innings. Ashley Nurse and Sulieman Benn took four wickets each as Windwards crumbled after a strong start. In reply, Shillingford and medium pacers Nelon Pascal and Keon Peters dismissed Barbados for a paltry 64.

Openers Devon Smith and Tyrone Theophile extended Windwards' 120-run lead, with an opening stand of 170. While Theophile fell for 91, Smith smashed an unbeaten 150 as Windwards declared at 301 for 4, setting Barbados 422 runs for a win.

Shillingford then spun out Barbados for 205, picking up eight wickets for 82 runs off 37 overs. Barbados opener Kraigg Braithwaite held on end up, scoring an unbeaten 91 off 266 balls but Shillingford's dominance proved too much for Barbados.

Trinidad & Tobago routed Combined Campuses and Colleges by 10 wickets in Port of Spain. Put into the bat, T&T were in trouble at 19 for 3 before a 117-run fourth-wicket stand between Jason Mohammed and captain Dwayne Bravo lifted them to safety. Mohammed anchored the T&T innings, stitching together partnerships of 80 runs and 104 runs with Kieron Pollard and Stephen Katwaroo respectively, and scored his second first-class hundred. T&T declared their innings at an imposing 406 for 9.

CCC began their reply well and a 107-run partnership between captain Kyle Corbin and Raymon Riefer for the fourth wicket took them to a solid-looking 168 for 3. However, the innings went downhill after Corbin was dismissed for 62, with the score at 168 for 4. CCC lost their next six wickets to fast bowler Rayad Emrit for just 20 runs to be dismissed for 188.

CCC were in danger of facing an innings defeat, tottering at 53 for 5 after T&T enforced the follow-on with a lead of 218 runs. Floyd Reifer and Chadwick Walton added 98 runs for the sixth wicket to lend some stability to the innings while a 72-run stand between Walton and McClean helped CCC edge past T&T's lead. Another lower-order collapse - four wickets in five runs - ensured that T&T needed a mere 11 runs for a win. The T&T openers took two overs to reach the target and bring their side to second place on the points table, level with Jamaica.

In reply, Leewards crumbled to 108 all out as Miller picked up seven wickets, conceding a miserly 13 runs in 20.2 overs. Jamaica struggled in their second innings and were 116 for 9 at one stage, before a 109-run tenth-wicket partnership between Odean Brown and Sheldon Cotterrell took them to 225. Brown scored his second first-class fifty before he was dismissed by Athanaze for 59.

Leewards had a poor start in their chase of a steep target of 327 runs. Quick wickets from fast bowler Andrew Richardson and Cotterrell reduced them to 20 for 4. A 91-run partnership between captain Sylvester Joseph and Jahmar Hamilton restored some stability to the chase but Jamaica were on top after Leewards lost their next four wickets for just 11 runs. Miller dismissed Hamilton for 52 and took three more wickets to give Jamaica a convincing win.