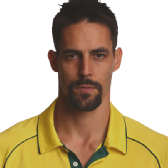 This was a day when the hounded became the hounder. Stuart Broad was treated to the boos and occasional abusive chants he knew would be inevitable at the Gabba after he had endured a cynical process of vilification but, as six Australian wickets tumbled for 132, even his most vocal assailants had to concede that baiting him had not exactly gone to plan.

His role as Ashes villain had merely strengthened his mindset. Figures of 5 for 65 in 20 overs on a day designed for batting stated as much.

"The wicket looks fantastic," said Michael Clarke, an Australia captain in renewed heart, as he won the toss at the start of the return Ashes series. The same could not be said of Australia's top-order batting. Presented with an opportunity to prove that they are capable of challenging England's supremacy, they flunked it, embarking on a collapse as extreme as any they suffered during the English summer.

Australia had singularly failed to get the flying start in the series to sustain their talk of renewed self-belief. For all that, they almost got away with it as Brad Haddin and Mitchell Johnson added 114 in 39 overs for the seventh wicket, Haddin awash with good sense, Johnson driving with a pendulum's free swing, both making half-centuries. England took the new ball with relief.

If Broad's first wicket - Chris Rogers, caught off the splice at gully in his second over - came with the Gabba at its most impassioned, his fifth wicket felt like the one England most needed. Johnson's stumps were sent flying, inviting a mobbing from his team-mates that was tinged with gratitude. An eighth Australia wicket, Peter Siddle, followed to James Anderson, but the redoubtable Haddin, unbowed after Broad struck him flush on the helmet, remained unbeaten on 78 at the close.

Australia should have made better use of a good toss. A few lonely clouds hung around blue skies to no great purpose and, although the pitch had decent bounce and carry, and enough moisture to give England hope, there was not the sideways movement they might have anticipated. They sorely needed their third seamer, Chris Tremlett, picked more on faith than form, to hold together and although his pace would barely trouble a speed camera, he did just that, intervening at a crucial stage to have Steven Smith caught at slip and relinquishing less than three runs an over.

But it was Broad who carried England's challenge, Broad who became the first player to 50 Test wickets this year, Broad who yearned to prove his worth to the Australian public just as Anderson had done before him. England's psychologists have concluded that three players in this side thrive on abuse: Broad is one of them. During the morning, he felt as if his rhythm was imperfect but clawed himself into the game.

Australia were reasonably content at 71 for 1, with lunch only four balls away, but Broad found a hint of extra bounce and away movement to expose Shane Watson, who was caught at second slip, and as five wickets fell for 61 in 20 overs their vision of mounting a concerted Ashes challenge in front of their own supporters was, at the very least, temporarily shelved.

England had reason to be grateful for a ball change a few overs before Watson's wicket. It was Broad who pursued and won it. Perhaps it will be presented as another low trick. It was a surprise nobody hollered for Broad to "leave our balls alone", just as they had told another Ashes villain, Douglas Jardine, to ignore the flies more than 80 years earlier.

Brisbane's regional paper, in a fake show of disgust, had brandished headlines stating that it would refuse to refer to Broad by name throughout the Test. Appointed as the Man With No Name, Broad went about his work with the suitably stony expression of Clint Eastwood in the film so titled, communicating that there was serious business to attend to.

There was not much short of a length from Broad, but what there was tended to bring him wickets. Michael Clarke perished against the first short ball he received. He has moved up in the order from No. 5 to No. 4 as much as anything because of expectations that he should "man up", but his back ailment leaves him statuesque and vulnerable against the short ball, especially one as wickedly directed as the delivery from Broad which he could only pop into the leg side.

David Warner had launched Australia's Ashes challenge with an aggressive opening statement, responding to Broad's first delivery - perhaps unintentionally short as his front foot slipped in the crease - by pulling it resoundingly in front of square.

But it is the restructuring of Warner's game, with the intention of discovering something more permanent, that is central to Australia's challenge and, with four domestic centuries to his name this season, he was at his most orderly in making 49 from 82 balls. His departure, though, was the most disappointing of all as he slapped a nondescript short delivery off the back foot straight to cover. Broad's previous ball had been a wide; he had been jeered for the last time.

George Bailey had become Australia's 436th Test cap and was presented with the baggy green before start of play by a former captain, Mark Taylor. His place had been won because of his exuberant displays in limited-overs cricket in India, a modest first-class record overlooked. It did not look much of a grounding as Anderson gave him a going over. He edged Anderson short of the wicketkeeper Matt Prior, tried to hook a bouncer and struck only fresh air, and his outside edge was passed more than once. Anderson finally rounded him up at first slip.

England's biggest scare came for Anderson 20 minutes before lunch. It is a new outfield at the Gabba and Anderson's attempts to slide on it to deny Warner a boundary through midwicket resulted in a huge divot tearing from the turf.

Memories of Simon Jones' injury when his knee dug into the Brisbane turf on the opening day of the 2002-03 tour briefly flared, but whereas Jones' tour - and almost his career - ended in an instant, Anderson brushed the mud from his trousers and rose to his feet, relieved to have suffered no permanent damage. That "no diving" orders would go out to the bowlers at lunch seemed inevitable. Instead it was Australia who nose-dived as their old frailties returned to haunt them.