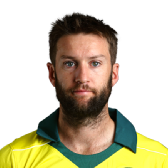 Gujarat Lions had picked up only one wicket in two matches this season. But Andrew Tye took five times as many - including a hat-trick, the second of the day - to record the best figures by an IPL debutant. His 5 for 17 was then followed by a typically brutal display of batting from the top order to ensure a perfect record against Rising Pune Supergiant after three matches so far.

In the space of this past week, Lions have put on their two worst performances in the Poweplay. They leaked 73 runs in the season opener against Kolkata Knight Riders last Friday and now they gave up 64 to Rising Pune Supergiant. Their bowling attack largely consists of medium-pacers who, unless there is some sideways movement, can be lined up. All seven fours in the first six overs came off length balls. Two of the three sixes came off length balls. Praveen Kumar was carted for 25 runs in the fifth over. It had been 10 years since he had been that expensive in the IPL.

Pune had just recorded their fastest fifty of the tournament - in 27 balls. They had to be slowed down and so Lions turned to the bowler with the best slower ball. A batsman can read the offcutter when the bowler's wrist breaks. Ditto the legcutter. The back-of-the-hand slower ball is difficult largely because of the way it misbehaves off the pitch. But the knuckle ball is slightly different for much of its potency lies in making sure the batsman doesn't pick it.

As a batsman, 22 yards in front, it is hard to read the change in Tye's grip and he doesn't give anything away in his run up. He took four of his five wickets with that knuckle ball, including the one that sealed his second hat-trick of 2017.

Tye's introduction brought Lions back from the brink. They allowed only five of the 48 deliveries that followed the Powerplay to get to the boundary and in the 14th over the returning Ravindra Jadeja dismissed MS Dhoni for the second time in the IPL. The wicketkeeper-batsman fell for 5 off eight balls, his third successive innings at a strike-rate below 100.

Lions' specialist openers made 762 runs in 2016 - that's 30% of the team's total runs. Stopping them had to be Pune's best chance to defend 171. But, on a slow pitch, they fed Brendon McCullum and Dwayne Smith with fast bowling. It proved a costly mistake. Both of them were set by the time Imran Tahir came on to bowl and the legspinnner was smashed for 15 runs in his first over. He would be hit for 10 boundaries in his spell - the most he has conceded in all the matches he has played in the IPL and for South Africa.

With the main threat decimated, all Lions had to do was trust in their batting depth. They had pushed Aaron Finch down the order because among their four overseas openers he handles spin best - averaging 27.73 and striking at 129. He and Raina, the first man to play 150 IPL games, saw this one through to the finish.

No. of balls taken for Rising Pune to get fifty in this match - their quickest in the IPL

Number of runs conceded by Praveen Kumar in the fifth over of the innings - the joint-most Rising Pune have scored in one over of the IPL against any team.

Number of wickets taken by Andrew Tye while giving away 17 runs - the best figures by an IPL debutant as well as his T20 career best.

Previous instances of two hat-tricks on the same day of the IPL. Andrew Tye's followed Samuel Badree's hat-trick against Mumbai Indians in the day's first match.

Boundaries (fours and sixes) conceded by Imran Tahir against Gujarat Lions, the most he has conceded in the IPL or T20Is