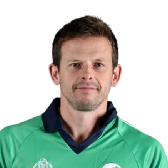 It took ten matches, but England finally managed to beat Australia. And they did it in style by earning a bonus point. In what was easily their best performance of the CB Series, they were superbly led with the bat by Ed Joyce and comfortably defended their hard-earned 7 for 292 to win by 92 runs.

As Andrew Flintoff celebrated his first victory as captain in Australia his team had moved level on points with New Zealand and were in with a serious chance of making the finals. "It's taken a while to come, but we played great," Flintoff said. "It's a great feeling."

To add to the sudden reversal England also watched as the home side was the one hit by injuries, with Andrew Symonds retiring hurt with a bicep strain and Ricky Ponting missing the game with a hip problem. While Symonds was in full flow with Matthew Hayden Australia moved into a reasonable position after a horrible start, but it did not last.

Adam Gilchrist fell to an unplayable first-up swinging yorker from Liam Plunkett before Brad Hodge went in the second over as they dropped to 2 for 4. The situation got worse when Michael Clarke's wild swing left them at 3 for 45 and the assignment was too hard.

Hayden's 51 off 62 balls stabilised the situation, but Australia effectively lost three key men in four overs. Hayden hit to cover, Symonds departed with the physio on 39 and Michael Hussey was bowled by the debutant Ravi Bopara in the 25th over. There would be no resuscitation from 5 for 137 and England sealed the win with 67 balls to spare.

Plunkett's 3 for 24 was crucial in the success while Sajid Mahmood also played an important role with 2 for 38. However, Joyce had the strongest say in the result with his maiden one-day century. Not only did it set the platform for a huge total, but it also eased the load on an under-pressure batting line-up.

Joyce, who has enjoyed opening since his promotion in Perth, posted 107 off 142 deliveries and shared important partnerships of 58 with Mal Loye, the highest first-wicket stand of their tour, and 103 with Ian Bell. Dropped by Shaun Tait on 6 and Symonds on 59, Joyce improved on his half-century on Tuesday during a breakthrough performance that set him up for the World Cup campaign.

He was prepared to mix defence with successful attack and played some punishing pulls and drives through cover. Collecting ten boundaries, Joyce's century came off 136 balls with a miscued hook that ran to the fine-leg fence. He raised his bat and enjoyed some smiles before falling when pulling Tait in front of square-leg. "I'm absolutely delighted," he said at the dinner break after writing his name on the SCG honour board.

England's hope of a big score had begun during Joyce's contribution with Bell, who brought up his first fifty of the series. However, Bell relaxed on 51 and pulled loosely at Glenn McGrath, giving Gilchrist a comfortable take from the top edge. Flintoff was lbw trying to cross-bat Cameron White and Andrew Strauss' 26 was also ended by an attempted heave.

While his team-mates fell, Joyce lifted his pace and Jamie Dalrymple's closing 30 off 18 balls added the icing to the total. However, not everything fell England's way as Loye's eventful journey with the slog-sweep finally became painful when he slipped slightly while attempting to launch McGrath and the ball struck his helmet grille. By the time Loye stood up there was blood on his chin, which would later need three stitches.

After a lengthy delay Loye, who did not field, chose to continue and promptly pulled McGrath's short and wide delivery outside offstump to Bracken at deep square-leg. It was one of McGrath's two wickets, a tally matched by the debutant Shaun Tait, who sprayed and swung the ball in gaining 2 for 68.

Tait was one of Australia's experiments in a match in which their main motivation was keeping alive their unbeaten record for the summer. It was not enough to spur them and after five Test wins, a Twenty20 success and three one-day international victories they fell to England.