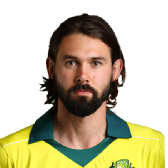 Blazing batting and diligent bowling by South Australia clinched a six-wicket victory and a bonus point over Western Australia in the domestic limited overs match at the WACA ground.

Michael Klinger, Daniel Harris, Daniel Christian, Callum Ferguson and Tom Cooper all made useful contributions, and each struck at least one six as SA rattled to the target at better than six runs an over. The left-armer Ryan Duffield claimed two wickets but his 10 overs cost 83 runs.

The Warriors only reached their 8 for 252 due to a shot-speckled century by Luke Ronchi, having earlier slipped as low as 6 for 132. Kane Richardson grabbed three wickets for SA while Jake Haberfield, a CA Chairman's XI selection to face India, also bowled well.

The win lifted SA to equal top of the competition table with Tasmania on 18 points, each team now having played six matches.