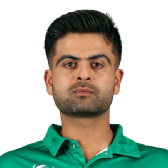 Azeem Ghumman's quickfire 59 set the Hyderabad Hawks on their way to a seven-wicket victory over Lahore Eagles at the Gaddafi Stadium. Chasing a stiff 178, Ghumman, who captained Pakistan Under-19s at the World Cup earlier this year, blasted nine fours and two sixes and added 91 in seven overs for the first wicket with Sharjeel Khan.

Hyderabad briefly lost their way after the opening stand, losing three wickets cheaply and had Faisal Athar retired hurt. Thirties from Rizwan Ahmed and Aqeel Anjum, however, safely carried them to their first win of the tournament, with two balls to spare.

Lahore seemed to have the upper hand after their captain Taufeeq Umar, who last played for Pakistan in 2006, played through the innings for a 78. No one else from the top seven provided him much support, but No. 8 Junaid Zia smashed four sixes and two fours to raise 47 from the final 14 deliveries.

In the day's second match, Rawalpindi Rams beat Karachi Zebras by 28 runs. The defeat knocked Karachi out of the tournament and left Rawalpindi facing a knock-out clash with Sialkot Stallions to determine who will progress from Group B.

Rawalpindi were struggling at 30 for 3 when 36-year-old Naved Ashraf, in his 19th season of first-class cricket, provided them the momentum with a quick 45 which included four sixes and two fours. There were no other big contributions but a string of twenties pushed Rawalpindi to a challenging 172.

Four boundaries from Khurram Manzoor in the first two overs gave Zebras' chase a brisk start, but he fell to left-arm fast bowler Sohail Tanvir for 19. No. 3 Babar Rehman perished in the third over, and following a burst of hitting from Hasan Raza -now 28 years old but famous for being the youngest Test debutant - there was another slew of wickets which left them at a hopeless 73 for 5, a position from which there was no comeback.

Lahore Lions eased to a 36-run win over Peshawar Panthers at the Gaddafi Stadium after their openers, Nasir Jamshed and Ahmed Shehzad, had propelled them to a challenging total. Asked to bat, the Lahore openers gave their team a solid foundation in a 113-run stand in just 11.2 overs. Jamshed smashed eight fours and two sixes in his 79 while Shehzad's innings was laced with six fours and one six. That wasn't all. Umar Akmal came in and played a typically aggressive knock, carting eight fours in his 52. Thanks to his onslaught, Lahore reached 206 and it proved adequate.

Peshawar, in their reply, failed to emulate the start provided by the Lahore openers, with the first wicket falling on 16. The Lahore bowlers struck at regular intervals and while there were contributions that promised much, the highest, unfortunately for Peshawar, was 35 from Zohaib Khan at No.8. Wahab Riaz shone with the ball for Lahore, taking 3 for 15 as Peshawar folded for 170.