There has been significant discussion in world cricket circles recently regarding a perceived imbalance between batsmen and bowlers, with a key point of contention being the dramatic development in bat technology over the past few years. Modern bats are nominally the same shape as those used by WG Grace, Don Bradman or Vijay Merchant, but of late there has been a significant change in terms of the depth of willow contained in the hitting area.

It is fascinating to look back to the start of organised cricket to see how techniques and strategies have either evolved from, or caused changes to, the design of the bat.

The first mention of the bat used in cricket can be traced as far back as the 1620s, although this particular reference is in relation to the death of a fielder during a game, and the inference is that the batsman had hit the fielder with his bat in order to prevent him catching the ball. This incident may have served as an instigator of what is now Law 37 - Obstructing the Field.

Bats at that time were shaped very similarly to modern hockey sticks, as the ball was delivered underarm and rolled along the ground.

The cricket bat began its transition to the more recognisable "rectangular" profile in the 1770s, when the laws changed to allow bowlers to "loop" the ball in the air while still bowling underarm. This triggered a change in batting technique, with players starting to use a more vertical bat, as opposed to the horizontal "sweeping" motion that was commonplace when balls were rolled along the ground. The bat was still very heavy at the base, and it wasn't until the 1820s, with the advent of roundarm bowling, that bats started to take a profile more similar to what we see today.

The laws of the game made no restriction on what size or shape the bat needed to be, until a clever-thinking player, one "Shock" White representing Ryegate, marched out to bat against Hambledon in 1771 with a bat the width of the stumps. This tactic was considered quite unsportsmanlike, and Hambledon's recommendation that the bat be officially limited to a maximum of four and a quarter inches in width was quickly accepted around all of England.

Due to this change in law, the different shots we see now started to take shape. However, batting technique in general was predominantly based around power and strength rather than finesse.

These early bats could weigh up to a massive five pounds, and were constructed from the heartwood of the English willow tree. This part of the timber is very dense, and this is why the cricket bats of this period appear far darker in colour than more modern ones.

In 1890, the English bat manufacturer CC Bussey started using the sapwood of the tree instead, and found that it was far lighter and also more cosmetically appealing to buyers. Soon afterwards, all bats began to be constructed from this "white" willow. Bats of this era were characterised by a very slim and relatively straight profile, with very thin edges. The distribution of the weight was often quite high in the blade, as this helped with the desire for a "feather" feel.

The actual length of the entire bat was also smaller than it is today, because the handle was quite short. The bats were usually in the range of 2lbs to 2.4lbs. Batting technique was again altering, with many players now relying on placement rather than mere power. Ranjitsinhji's development of the leg glance and glides was, at least partially, made possible by the bat being light enough to be manoeuvred easily. Late cuts and other shots that relied on timing instead of brute strength were quickly adopted as the bats of the day allowed greater improvisation.

Bats have been predominantly made from English willow, Salix alba caerulea, since the early 1800s, because it's tough, light, and resilient to the impact of a hard ball. Other timbers have been found to be either too dense, which makes them too heavy to be used, or not dense enough, which results in them breaking on contact with the ball.

When cricket spread from England to other countries, such as the United States (Philadelphia), Canada, India and Australia, experiments were made with both local timbers and imported English willow clippings to foster the development of local bat industries.

English willow trees were planted in Australia, but it was found that in the heat of summer, in most locations it grew too fast, which meant it was not dense enough, and the bats made from it cracked very quickly with use. Experiments in growing English willow trees in nearby New Zealand also faced problems. The cooler climate was more suitable, but the high winds in the country resulted in many of the trees developing storm damage over their lifespan. This is where the trunk of the tree bends in strong wind, which causes some of the willow cells to fracture. These fractures were not easily identified by the naked eye, but bats made from the affected timber also quickly broke. 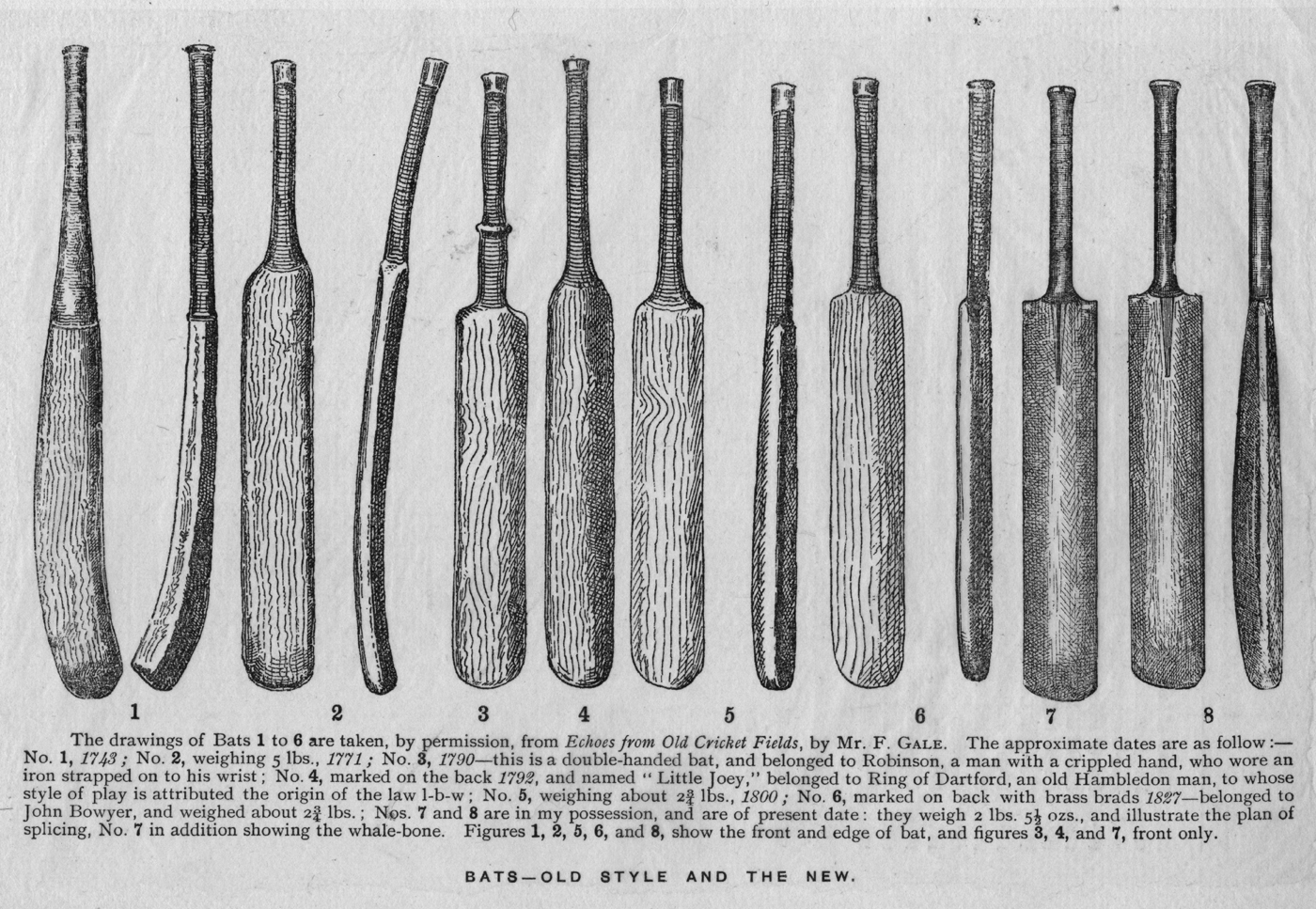 Law 6 specifies that a bat is composed of two components, the handle and the blade, and the blade must be composed entirely of wood.Appendix E later clarifies that the bat dimensions, with the length not to exceed 38 in/96.5 cm, and the width being less than 4.25 in/10.8 cm at its widest part. Currently there are no restrictions on the depth of the bat, but the MCC World Cricket Committee has recently proposed the introduction of a limit to bat edges of 4cm, and an overall maximum depth of 6.5cm.

These factors meant that almost all early cricket bats in Australia were still made from timber imported from England.

In the 1890s, Ned Gregory, who had played in the first Test match, back in 1877, and Bill Stuart, who was to follow Gregory as a curator of the Sydney Cricket Ground, built some prototype bats from the timber of the Moreton Bay fig tree, which they thought might have similar properties to English willow. There are no records of how these bats performed, but the fact that the experiment was not pursued further would indicate that it was not a success.

A few years later, England batsman Archie MacLaren sent some English willow cuttings to umpire Robert Crockett, who cultivated a farm of trees at Shepherds Flat in country Victoria, where the weather is more like that of England at large. Australian-grown English willow bats were subsequently used over the following decades by a number of Test cricketers, including Warwick Armstrong and Lindsay Hassett. However, the majority of cricketers around the world continued to use bats made out of English willow, and when the Crockett company was bought by Slazenger in the 1960s, this local Australian willow tree experiment was largely abandoned.

The design of cricket bats had remained largely unchanged since the 1890s and the move from heartwood to white willow. In the late 1920s and '30s, while leading batsmen like Jack Hobbs, Bradman and Wally Hammond used bats of around 2.2lbs, Bill Ponsford was famous for his "Big Bertha" bat, which weighed about 2.9lbs. Most players were still using much lighter bats, and batting techniques were still predominantly based on touch and feel.

It was normal in this period for at least 110 overs to be bowled each day, so even at 2.5 runs per over, nearly 300 runs would be scored in the day. The introduction of both timeless and five-day Test matches saw less emphasis on quick scoring and more on survival. Many batsmen relied on stroking or deflecting the ball rather than striking it fiercely.

It was not until the 1960s that the next real revolution in bat design started to emerge.

While the Australian experiment with locally grown willow was ceasing at around this time (although it has been partially resurrected in recent years), other countries were developing bats using their own local timbers. In particular, the Kashmir willow (Salix fragilis) was used for bats within India and Pakistan. The wood is generally harder and of a darker colour than English willow, has less durability, and players believe it is less responsive. Nonetheless, it does produce bats of generally similar weight to English willow, and the local manufacturers in India and Pakistan developed bats that largely replicated the trends emerging from England.

Some players were now starting to experiment with much heavier English willow bats. Graeme Pollock and Clive Lloyd both used blades that exceeded three pounds in weight. It was felt that the greater mass assisted the batsmen in hitting the ball with greater power. The heavier options were not for all players, though, as many struggled to play cuts and hooks with them. Garry Sobers, the first man to hit six sixes in an over in a first-class match, continued using a very light bat until the end of his career.

However, during the 1970s, John Newberry and Gray Nicolls started experimenting with various changes in the weight distribution of the bat. Karsten Solheim, an engineer with General Electric in the USA, had started making golf putters with heel-toe (or perimeter) weighting in the late-1950s. These putters had proved extremely popular with both professionals and amateurs due to their additional forgiveness on off-centre hits. Gray Nicolls used similar concepts in their "Super Scoop" bat, which featured a large hollow in the back of the bat, and more wood around the edges. This redistribution of weight from the middle to the edge allowed the manufacturers to increase the "sweet spot" on the bat, thus making it more forgiving to slight mishits. Batting techniques adapted once again, with a renewed focus on strength and power rather than deflection and placement.

Modern bat-makers have further experimented with various techniques, and by careful design of scoops, hollows, plugs, cores and so on, the sweet spots have been increased and even mishits race to, and often over, the boundary.

Another innovation has been the increased "drying" of willow. By reducing the overall moisture content of the bat below the more normal 14-15%, manufacturers can effectively reduce the overall weight but also maximise the size and forgiveness. Many current bats are actually lighter than those used in the 1980s, but their depth and edges, in particular, are far greater. However, this change has also affected the durability of bats. Bradman said that he changed his bat around every 1000 runs or so, and that this was considered fairly normal for batsmen of his era (admittedly for Bradman, this was after every three or four innings). In contrast, Herschelle Gibbs once commented to the Guardian that he went through 47 bats in one season.

Golf, tennis and other sports have seen a major revolution in recent years due to changes in materials such as carbon fibre, graphite and titanium. Metal golf drivers have increased three-fold in size when compared to the older persimmon models, but the overall weight has actually decreased, which allows the golfer to swing faster but with more forgiveness on mishits.

Cricket has not yet seen this material shift (apart from Kookaburra's brief experiment with a graphite-reinforced bat) due to the requirement for the bat to be made of wood (the law mandated bats to be made from wood after Mike Brearley complained that Dennis Lillee's aluminium bat was damaging the ball, during the 1979 WACA Test), but the bat continues to evolve and manufacturers keep seeking the next big breakthrough.