Early on the legendary Invincibles tour of 1948, Essex managed something few others teams achieved that summer - they bowled out the Australians, Don Bradman and all, and did so inside a day. The only problem was the tourists rattled up 721 before they were dismissed. It was - and remains - the most runs scored in a single day in first-class cricket, and the massive total included only nine extras and not one leg-bye.

In their opening five first-class matches the Australians had already shown what a formidable batting side they were and how quickly they could score. Four times they had racked up more than 350 runs in a day, and at The Oval less than a fortnight before they met Essex they scored 479 for 4 on the opening day against Surrey, going on to record their fourth win by an innings. The only slight hiccup had come in a low-scoring rain-affected game against Yorkshire, where they edged home by four wickets.

After thrashing the students at Cambridge, the Australians headed by coach to Southend to meet Essex and 24-year-old Trevor Bailey hitched a ride with them. Bailey had top-scored for the university and was already a regular in the Essex XI. After the first-day onslaught he wished he had stayed in Cambridge.

The Australians picked a strong side, their top four all in the Test team, and Bradman returned after missing the Cambridge game. He had only batted three times on tour - resting between innings victories - but had nevertheless scored 334 runs at 111.33. Bill Brown had a double-hundred at Fenners to his name, while Sid Barnes, his opener partner, came into the match on the back of 176 against Surrey.

Bradman won the toss and, to the appreciation of the 16,000 crammed inside the compact Southchurch Park on a sunny Saturday, decided to bat. The summer was all about the Australians and everyone wanted a chance to see Bradman in action on his farewell tour.

They only had to wait 95 minutes but in that time Brown and Barnes put on a breezy 145 runs for the first wicket, the only flutter coming when Brown's off stump was removed early on off a no-ball. Their otherwise untroubled progress ended when Barnes hit his wicket trying to cut offspinner Ray Smith. To loud applause Bradman strode to the middle. It was expected he would play out the remaining 25 minutes before lunch; instead he reached the break on 42, with his side on 202 for 1.

Legspinner Frank Vigar was given the last over of the morning. Bradman left the first ball and then cracked the next four to the midwicket boundary. Essex captain Tom Pearce kept reinforcing the leg side, Bradman kept threading the ball between the fielders. Before the final ball, wicketkeeper Frank Rist said to him: "Haven't you got any other shots?" "I'll show you those after lunch," Bradman replied, before threading the sixth ball to precisely the same place for his fifth consecutive boundary. Then he turned to Rist and said: "I did say after lunch."

By the time Bailey had Brown caught in the gully by Dick Horsfall, he and Bradman had added 219 in 90 minutes and the Australians were on 364 for 2. That brought Keith Miller, who headed the tourists' batting averages, to the middle. A flamboyant and aggressive batsman, his arrival was a daunting prospect; only, he was not remotely interested in what he saw as cheap runs. As Bailey bowled his first ball, Miller stood back with his bat raised and allowed the ball to hit the stumps.

What followed has never been agreed on. Some say Miller changed and went to the races, others than he resumed a poker game, others that he was proving a point to Bradman. What is beyond doubt is that he regarded the amassing of runs in such a way as wrong and wanted no part of it. "I got sick of the slaughter," he said, adding he thought Bradman was wrong in not allowing some of the younger players a chance against a side they knew beforehand to be weak.

"After hitting the stumps, I commented to Bradman, who was at the non-striker's end, that he had not appeared very interested," Bailey recalled. "Don replied: 'He'll learn.'"

After that briefest of lulls, the battering continued. Bradman, who brought up his hundred in 77 minutes, was eventually dismissed swinging across the line when he had scored 187 in 124 minutes. In all, he hit 32 fours and one five, and his scoring rate of 90 runs an hour was the fastest in his career. "[It] was all part of his deliberate, merciless, efficient plan, brilliant in its execution, to build up the biggest possible psychological advantage for the Australians over the English bowlers as a whole," was the verdict of the News Chronicle.

A second-string middle order might have been expected to provide some respite but Essex were punch drunk and their bowlers tired. Ron Hamence made 46 and then Sam Loxton and reserve wicketkeeper Ron Saggers put on 166 for the sixth wicket in 66 minutes. Saggers, celebrating his 31st birthday, brought up his maiden first-class hundred in 94 minutes, Loxton his in 76 minutes.

Writing for the AAP agency, former Australia spinner Arthur Mailey said the crowd started to leave an hour before the close as they were "so surfeited with the slaughter". The Guardian dryly noted "interest started veering to the microphone announcements of children searching for their aunts and wives wondering about their husbands". Mailey added Essex became so demoralised they dropped easy catches and bowlers barely bothered setting fields.

But Loxton's dismissal brought relief and Essex took the last four wickets for 57, the final one falling within ten minutes of the scheduled close and so sparing their shattered openers from having to face the Australian opening bowlers that evening.

At the fall of the final wicket the crowd swarmed onto the pitch and the handful of police on duty had to clear a way back to the pavilion for the players. Hundreds remained until the Australians left to board their coach, and when they left the sanctuary of the pavilion they were besieged by autograph hunters

Bowled out in a day 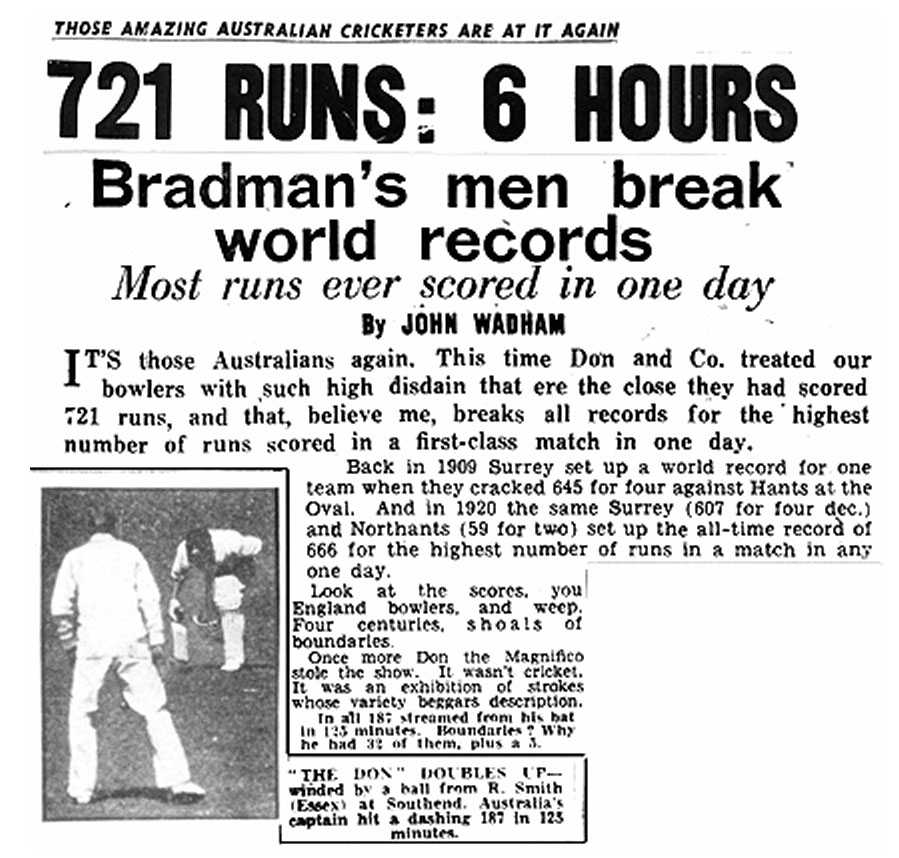 It is claimed the Essex scorer completely lost track of what was happening, such was the rate of scoring, and the county's scorebook certainly contains a number of corrections. The scoreboard itself was left high and dry as the hundreds column only went up to six, and remained blank when the Australians passed 700.

Four of the Australians scored hundreds and four Essex bowlers brought up their own less welcome centuries. Bailey, who broke a finger on his left hand early in the day stopping a pull at short leg, took 2 for 128, including Miller's gift, while Peter Smith grabbed three late wickets to finish with 4 for 193. Essex managed to send down 129 overs in the day.

At least the Essex players had a rest day on the Sunday to recover, although it did them little good. Another full house packed the ground on the Monday - the Whitsun Bank Holiday - and watched the home side, minus the incapacitated Bailey, dismissed for 83 and 187 to give the Australians their fifth innings victory, with a day to spare.

The match, or more accurately the way the Australians approached it, set the tone for the summer. It was not about individual achievements so much as results. In his biography of Bradman, Charles Williams wrote: "They collectively announced their true intentions. Opponents were there to be defeated; and were, whenever possible, not just to be defeated but to be annihilated. The purpose was to establish a psychological ascendency over any and every opposition to carry through to the Test matches."

Is there an incident from the past you would like to know more about? Email us with your comments and suggestions.