<
>
4th Investec Test, Australia tour of England and Ireland at Nottingham, Aug 6-8 2015
England won by an innings and 78 runs
Player of the Match 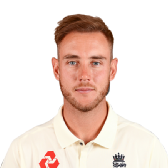 Stuart BroadEngland
4th Investec Test, Australia tour of England and Ireland at Nottingham, Aug 6-8 2015
England won by an innings and 78 runs
Player of the Match

Alastair Cook had called for England to "etch their names in history" as they sought a victory in the fourth Investec Test that would regain the Ashes and ease the memory of their whitewash in Australia 20 months earlier. But even Cook, an England captain brimming with expectation, would not have anticipated the rout that came to pass as Stuart Broad carved through Australia's batting at will in one of the most startling opening sessions in Ashes history.

Australia, utterly bereft, were dismissed for 60 in only 18.3 overs, with cricket statisticians wading through damning numbers either achieved or narrowly avoided. Broad, carrying an onerous responsibility in the absence of James Anderson, returned his best Test figures of 8 for 15 in 9.3 new-ball overs amid scenes of general delirium. Only Jim Laker, twice in the same match, has bettered that for an England bowler in the Ashes.

Then order was mightily restored. England came out, so did the sun, and the lead at their lead at the close was 214 with six wickets remaining: the Ashes surely as good as won after a single day. After Broad's feeding frenzy came Joe Root's serene imposition of reality - an unbeaten 124, sagacious where Australia had been so disorientated, his mind crisply attired for the task as he sparkled with a succession of drives and late cuts and a beaming sun taunted Australia for their inability to bat long enough to benefit from easing conditions.

Broad loves Trent Bridge, his home ground, and he must have sensed it making eyes at him on an overcast morning carrying great significance. The occasion stirred him, his competitive zeal allied to faultless execution. Long before the first drinks session of the day, he was brandishing the ball, a rudely red one only 6.1 overs old, to the crowd to mark a five-wicket haul.

Five wickets in record time: the curdled cream of Australian batting secured by the first delivery of his fourth over. Australia's batsmen were awash with paranoia. He bowled a perfect, inviting length on a good old-fashioned English seamer, finding just enough movement and leaving a systematic close-catching cordon to do the rest.

"Lack of batting technique leading to collapses," was the considered opinion of Geoffrey Boycott, prominently placed on ESPNcricinfo as the Test began. Australia can't say they weren't warned. Within 35 minutes, they were 29 for 6 and the batsman walking off was Michael Clarke, who had tried to stare down his lack of form with jaw-jutting defiance and who had just had an almighty swipe at a wide one.

Australia did not play and miss all that much, but they went hard at the ball, nicked often and when they did, England's catching was exemplary, nine of the 10 wickets falling in the cordon.

Broad's first wicket, that of Chris Rogers, made him the fifth England bowler to reach 300 in Tests. When Clarke departed, Broad's run of five wickets in 19 balls became the most prolific start to an innings in Test history.

Australia's inability to adapt to English conditions had never been more striking. An era where so much Test cricket is attritional on sedate pitches, and where T20 holds sway, has eaten into defensive techniques. From the first ball, as Broad scratched the crease, the brown earth revealed some residual dampness. But the movement was not excessive, not as extravagant as Edgbaston where England had won within three days.

England, for all that, won a good toss to have first bowl on an overcast Nottingham morning, aware that the Trent Bridge groundsman, pilloried for a stultifying surface officially marked as "poor" 12 months earlier against India, would feel obliged to provide something a little spicier. The Test pitch had been dug up and its replacement thought it was housing a county match in April.

Rogers has been one of the staunchest members of this Australia batting line-up but, as the series has progressed, Broad has found his measure, hounding the left-hander from around the wicket. When he found a little movement to expose a furtive push at the third ball of the morning, the tone was set.

By the time the first over was completed, one of cricket's prettiest scoreboards was looking uglier: 10 for 2. Steven Smith square drove Broad to the boundary boards - one of only seven boundaries in the innings - but then he edged to third slip. Broad had squared up left and right-hander in turn.

England preferred Mark Wood to Steven Finn with the new ball, aware of his excellent Trent Bridge record, and his insistent line was enough to draw an inside edge from David Warner to a ball that came back. Clarke, demoted to No. 5 in an attempt at protection, must have been scurrying around the dressing room for bat and thigh pad, feeling no protection at all.

Shaun Marsh, preferred to his brother Mitchell to give Australia six specialist batsmen, became the third duck in the top four, Root the latest sharp knife in the England slip box, standing at third. Adam Voges knows Trent Bridge from county cricket, but Broad knows Voges and knows he is a theory that has not come off. Resistance was beyond him as Ben Stokes flung himself rapidly to his right to hold a spectacular one-handed catch that will join Ashes folklore.

Broad ran down the pitch holding his hands to his face like a blushing deb who had just received an entirely unexpected present. England's wicketkeeper and four of the slips had all held catches in the first 4.1 overs.

Clarke's mind must have been swirling. A wideish delivery from Broad was tempting to a desperate man. Clarke was a desperate man. The ball flew to his rival captain, Cook, holding the catch above his head. It was a rash attempt to remedy matters with a single statement and it brought him only further misery. He might have fallen earlier, too, a statuesque flip-pull against Wood that fell short of Finn at deep square.

And so it went on, a collapse that was impossible to arrest. Finn joined the fun, bringing one back to strike Peter Nevill's off stump. Then three more to Broad. Mitchell Starc and Mitchell Johnson - his 25-ball 13 the height of Australia's resistance - giving two more slip catches to Root and the final one to Stokes as Nathan Lyon became the ninth batsman to fall in the close-catching cordon.

Broad had begun the morning hoping for 300 Test wickets. He finished level with Fred Trueman's 307. And as Fred would have said, pipe a puffing, it was hard to know what was going on out there.

Consolidation for England did not come automatically. By tea, Starc had taken three wickets in return: Adam Lyth undone by late swing; Ian Bell falling into a big inswinger; and Cook, who apart from one flirtation with the slips had looked intent on batting long, so exposing Australia's four-strong attack, unaccountably falling lbw to a floaty, full one. But Australia had opted for only four specialist bowlers to stiffen their batting (so much for that theory) and two of them, Starc and Johnson, are not exactly designed for long spells.

Only a dicky back, not for the first time in this series, disturbed Root in an assertive fourth-wicket stand of 173 in 34 overs with Jonny Bairstow, his Yorkshire confrere, whose 74 was less precise but a punchy innings designed nevertheless to establish him in England's middle order before he chipped Josh Hazlewood to square leg. Root saw out the day, but as adroitly as he batted, it was a day that belonged to Broad, a day when he looked a pugnacious and quarrelsome Ashes record in the eye and pronounced himself a winner.

Number of balls (or 18.3 overs) Australia lasted. It was the shortest-ever first innings of a Test.

Wickets taken by Stuart Broad in the first over of the match. Others to do this (since 2002) are Irfan Pathan and Chris Cairns

Number of times that extras have top-scored in a Test innings. This is third such instance for Australia (there were 14 extras)

Number of hundreds for Joe Root in Ashes Tests, making him the youngest Englishman to score 3 Ashes tons

Number of times England have taken leads of more than 331 in Tests v Australia since 1940. They've won all seven

Century opening partnerships between Warner and Rogers in the second innings of Tests in England. Overall, there are 9 such stands for Australia in England

David Warner's Test average in the second innings versus England; in the first innings against England, he averages 19.50

Wickets for Ben Stokes, his second five-for in Tests. His best figures are also versus Australia - 6 for 99 in Sydney in 2014

Number of times Stokes has taken six wickets in an innings in Tests, both in the Ashes.

Ashes Tests lost by Michael Clarke - the most by any Australian captain.