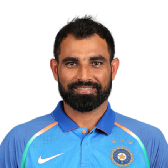 Chasing 264, West Indies were coasting. Dwayne Smith had gone past his highest ODI score, and his second-wicket partnership with Kieron Pollard was assuming threatening proportions. With nine wickets in hand, a long list of batsmen waiting in the dressing room, and 128 required at exactly a run a ball, this was West Indies' match to lose. They went and lost it.

It started with the wicket of Pollard, who chased a wide ball and dragged Amit Mishra onto his stumps. From that point, West Indies imploded. On a two-paced Feroz Shah Kotla pitch, India's bowlers put the brakes on the scoring, and panic took hold of the batsmen. West Indies lost their last nine wickets for 79 runs, and their last eight for 45.

West Indies have been penalised for a slow over rate in their defeat against India in the second ODI in Delhi. They were found to be two overs short of the target.

The West Indies captain Dwayne Bravo was fined 40% of his match fee while his team-mates were fined 20%. According to the regulations for minor over-rate offences, players are fined 10% of their match fees for every over their side fails to bowl in the allotted time, with the captain fined double that amount.

If Bravo is found guilty of one more minor over-rate offence in ODIs over the next 12 months, he will receive a one-match suspension.

In ODI cricket, six an over is usually a doddle when you have wickets in hand and not too many runs left to get. On this pitch, however, scoring quickly wasn't easy unless you had your eye in. India had discovered this to their detriment earlier in the day, both at the start and the end of their innings.

Having opted to bat first, they had struggled to break the shackles against accurate new-ball bowling from Ravi Rampaul and, in particular, Jerome Taylor, who attacked a good-length area close to off stump and allowed the pitch to do the rest. The second-wicket pair of Ajinkya Rahane and Ambati Rayudu had looked quite ill at ease while adding 46 in 67 balls, and even Virat Kohli had taken his time to find his feet.

Suresh Raina looked fluent right from the time he walked in, however, and his front-foot stride - the surest sign that his mind isn't entirely consumed by thoughts of the short ball - was light and sure whenever the bowlers gave him half an opportunity to drive through the off side.

Raina and Kohli slowly got on top of the bowling, and began the batting Powerplay on the cusp of India's first century stand for the fourth wicket since August 2012, and the score read 163 for 3.

It looked like a launchpad to a 280-plus score, but the dismissals of Raina and Kohli, in the 37th and 41st overs, sucked the momentum out of India's innings. Without MS Dhoni's unbeaten 40-ball 51, it's unlikely India would have gotten near their total of 263, with pretty much everyone else at the other end struggling to come to terms with the surface and West Indies' adroit use of the slower ball at the death.

The wicket of Pollard caused a similar, and even more dramatic, turnaround in the tempo of West Indies' innings. Till then, Mishra had endured a frustrating evening. He had bowled a number of good balls, had had a close lbw shout against Pollard turned down, and had been picked off for three massive sixes, two of them by Pollard, and not necessarily off the middle of his bat. Having just struck his third six, he went after one tossed up wide outside off and inside-edged it onto leg stump.

Following that breakthrough, Mishra bowled 16 successive dot balls, landing everything on a good length on off stump, getting some balls to grip on the pitch and others to skid off the surface, and completely confounded Marlon Samuels, who had scored a century against this same attack three days ago.

Smith carried on fluently at the other end, picking off Kohli's wrong-footed legcutters for four fours in two overs, and launched Mohammed Shami over the long-on boundary in the first over of the batting Powerplay. In sight of his first century in ODIs and List A cricket, however, Smith received the perfect riposte from Shami, a full, fast ball that swung in a touch and cannoned off the pads and into the stumps.

The required rate crept up to over seven, and Samuels slapped a perfectly slappable long-hop from Umesh Yadav straight to cover. The spinners then discovered the turn available on the pitch, Mishra spinning one sharply to find Denesh Ramdin's outside edge, Ravindra Jadeja doing the same to beat Andre Russell's edge and have him brilliantly stumped by Dhoni. By this point, West Indies had been knocked out - the four wickets that remained fell in the space of 26 balls, and India won with 21 balls left to play.

India's lowest score against West Indies after 10 overs for the loss of one wicket or fewer, since 2001

There have been only two instance of Nos. 4 to 6 making 50+ scores in the same ODI for India - Kohli, Raina and Dhoni were involved both times

Dwayne Smith's highest score in List A cricket before today - against Windward Islands in 2005. Highest ODI score was 68.