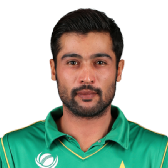 Mohammad AmirPakistan
3rd Test, Pakistan tour of England at The Oval, Aug 18-21 2010
Pakistan won by 4 wickets
Player of the Match

This series isn't doing much good for batsmen's averages and on this occasion it was England's top order that crumbled as Wahab Riaz enjoyed a debut to remember at The Oval with 5 for 63 to help remove the hosts for 233. Even that represented riches after they'd crashed to 94 for 7 with Matt Prior, one of the few batsmen to show consistent form, and Stuart Broad adding 119 for the eighth wicket to give the total some respectability before James Anderson struck in the final over of the day.

Yasir Hameed's positive strokeplay, in his first Test for two-and-half years, was a complete contrast to Pakistan's static approach in the previous match and it looked like they would survive without loss until Anderson found Imran Farhat's inside edge. The visitors, though, can reflect on their best day of the series. Mohammad Asif played his part with three wickets while Pakistan were much improved in the field with the only blot being Mohammad Yousuf's late drop off Prior but the innings finished next ball. Kamran Akmal also held four chances and although all were regulation that hasn't always made them certainties.

However, there was no doubt over the star performer. Riaz was drafted in as a replacement for Umar Gul, who injured his hamstring at Edgbaston and, despite not having any match practice after the Worcestershire tour game was hit by rain, posed a major threat to England with his skiddy pace. During the previous Pakistan domestic season he only managed 14 wickets at 40 and never took more than two in an innings.

After one morning of Test cricket he'd managed more than that by removing Andrew Strauss, Jonathan Trott and Kevin Pietersen before lunch then he added Eoin Morgan shortly after the interval. He tired as the day wore on - his lack of recent action playing its part - but claimed his fifth when he ended the recovery by trapping Broad lbw with a full slower ball.

The fightback led by Prior was an impressive effort as he and Broad added England's best eighth-wicket stand since Phil DeFreitas and Darren Gough combined for 130 against New Zealand, at Old Trafford, in 1994. Prior once again showed his class as a batsman following the hundred he made at Trent Bridge - and his innings will no doubt fuel the debate of him batting at No. 6 in Australia - and Broad passed 30 for the first time since the final Ashes Test, on this ground, last year as he threw the bat in productive manner.

Still, their efforts can't disguise a lacklustre performance from the top order and it began in predictable style with the early departure of Alastair Cook. He was always going to be under the microscope after a Test season which had brought 100 runs in seven innings and it didn't take long for Asif to work him over when he was caught on the crease and edged through to Kamran. The squad and selectors will continue to back their man, but at some point a major decision will have to be made regarding the Ashes series.

That, though, is for the future and Cook wasn't the only England batsman to struggle during the morning Mohammad Amir struggled to control the swing during his first spell but Asif was outstanding. Strauss has looked in decent form throughout the series without converting into a major score and this time was undone by a good ball from Riaz which grazed the outside edge to Kamran. However, initially umpire Tony Hill said not out and Strauss stood his ground as Pakistan reviewed, but there was clear evidence of an edge, both to the naked eye and on Hotspot, so Strauss was soon back in the pavilion.

Trott had again looked compact at the crease but didn't adjust to the more slingy style of Riaz and drove at a ball that was wide and edged to second slip where Hameed dived to his right behind third slip and held a superb catch. Yet Trott also stood his ground as Pietersen approached him, having kept his eye on the front line and noticed Riaz was close to a no-ball, but his foot had landed just behind the line.

Paul Collingwood, so often the man to bail England out of a hole, played on against Amir and Pakistan's outstanding morning was capped off when Pietersen got a thin edge against Riaz. He claimed his fourth shortly after the break when Morgan's uncertain innings ended with another scalp for the Riaz-Kamran combination and again it was Riaz's extra pace and bounce which brought success.

Graeme Swann has had other issues on his mind in recent days and, after a couple of boundaries, edged to third slip where Umar Akmal held a sharp catch as the visitors continued to snaffle everything. Pakistan probably thought they were through England at 94 for 7, but Prior was already looking in good touch and Broad started to find the middle of the bat.

Saeed Ajmal couldn't settle on a consistent line as both batsmen played the sweep with good effect and when the sun came out the ball started to do much less. Prior reached his fifty from 82 balls and when Anderson collected another duck he was 24 short of a ton with Finn for company. In the first Test the No. 11 had seen him to the landmark, but on this occasion couldn't see off Ajmal.