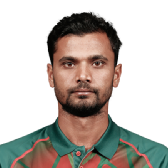 Shakib Al Hasan followed up his 3 for 15 with an unbeaten 33 to guide Bangladesh to a six-wicket win and the series 2-1 in Mirpur. The match was reduced to 37 overs a side due to thick morning fog and Zimbabwe, after being put in, managed a paltry 119 which failed to push the home side.

The early damage was done by Mashrafe Mortaza, who picked three top-order wickets to start Bangladesh's domination. Zimbabwe needed to push on, especially with the overs reduced, but found the going tough once Bangladesh unleashed their spinners. There were no worthy partnerships to speak of and the middle order failed to break free against the spinners who picked wickets at regular intervals and checked the scoring.

Bangladesh made a steady start towards the target and ensured against a top-order collapse. Tamim Iqbal began with some free-flowing boundaries off the seamers, while his partner Mehrab Hossain jnr showed stubborn resistance. Mehrab hung around for 25 balls and managed just 2 before he was run out by Vusi Sibanda. The opening stand of 38 set them on the right path.

Tamim however failed to carry on after making a start when he edged a wide delivery by Christopher Mpofu to Tatenda Taibu. The captain Mohammad Ashraful was unusually sedate, consuming 31 balls for three runs and each dot ball tested the patience of the crowd. His partner Raqibul Hasan got the chase moving with consecutive fours off Mpofu. When Ashraful was trapped lbw by Ray Price, hit in front off a slider, the home fans were only happy to see their star Shakib take guard.

He had a close call early in his innings when a slog to deep midwicket was put down by Sean Williams. Shakib was particularly harsh on Prosper Utseya, regularly sweeping against the turn. Raqibul became Price's second lbw victim but the wicket came all too late for Zimbabwe as Bangladesh were only 31 adrift of a series win. Mushfiqur Rahim sealed the victory with a boundary and Bangladesh ended the season on a high.

Bangladesh were in control from the first over of the match when Mortaza trapped Sibanda lbw. In his third over, he banged one in short to Hamilton Masakadza who fended a catch to second slip, while Stuart Matsikenyeri fell soon after, reducing Zimbabwe to 31 for 3.

The early wickets affected Zimbabwe's chances of accelerating in the two Powerplay spells, which produced only 39 runs. Taibu, who's had a miserable series, failed to script a turnaround as he hung his bat out to a short delivery by Rubel Hossain and offered a catch to Mushfiqur.

Utseya and Williams had added a stubborn 96 in the second one-dayer but they could manage only 13 today. Mahmudullah was the first among the spinners to strike, claiming Utseya for 6 off an arm ball.

Williams picked boundaries through the off side off the seamers but failed to get on top of the spinners, falling to the sweep off Mahmudullah for 38. Shakib's spell didn't make life any easier for the batsmen. Elton Chigumbura and Price perished while trying to swing him across the line and when Ed Rainsford gave him the charge, he was stumped.

Zimbabwe's effort kept with the trend of the series, which failed to produce a single score of over 200. But in the deciding one-dayer, they failed to raise the bar and in the end found themselves short.