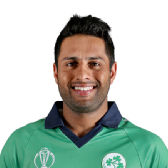 Spinners Gareth Delany and Simi Singh helped reduce Namibia to 20 for 3 in the Powerplay as Ireland defended 136 on a day when neither team batted 20 overs. Delany and Singh's early wickets made a dent to Namibia's scoring rate and subsequently put pressure on their batsmen, only three of whom got into double digits.

Namibia captain Gerhard Erasmus made 51 off 34 and was the only batsman who struck at more than run-a-ball. Erasmus was the aggressor in all three partnerships that he was part of, but the partnerships themselves weren't substantial. By the time he was the sixth man out in the 15th over, Namibia needed 44 off 32 balls. Seamers Mark Adair and Boyd Rankin made that difficult work and Singh returned to add two wickets to his tally and finish as Man of the Match.

Earlier, Ireland's top order had set a reasonable base before Zhivago Groenewald took two quick wickets to rattle them either side of the 11th over. From 71 for 2, Ireland fell to 85 for 4. Set batsman Andy Balbirnie and captain Gary Wilson then tried to stage a recovery, but their stand of 21 off 21 ended with Balbirnie falling to Craig Williams. It was the start of a collapse.

In his next over, Williams bowled Wilson, and in the over after that, JJ Smit accounted for both Shaun Getkate and Simi Singh; 106 for 4 had turned to 120 for 8 with two overs left, and it took an Adair cameo - the No. 8 made 17 off 7 with two sixes - to put Ireland in sight of a score close to 150. But Williams and Smit combined again and split the last two wickets over three balls to end the innings on 135 with five balls to spare.