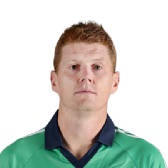 Ireland continued their powerful run in this tournament, cruising past Netherlands with 20 deliveries to spare in the preliminary final. Ireland will now meet Namibia for the prize of a place in the ICC World Twenty20 in Sri Lanka in September. It was another efficient team performance by Ireland, who have now won their last eight encounters with Netherlands.

Just a year ago, Kevin O'Brien was a star of the 50-over World Cup, and he is now coming into form here with both bat and ball. He arrived at this event expecting only to bowl in extremis, but has now taken nine wickets in 14 overs. "Since John Mooney and Alex Cusack have gone home injured I've been required more than I expected," O'Brien said. "I've been lucky because this pitch is a bit slower which suited me."

With some early life in the pitch, it was a good toss to win for Ireland, and they again struck early to remove the Netherlands openers. Michael Swart moved back to pull Boyd Rankin and was bowled, while Stephan Myburgh went to a stunning catch by Ireland captain William Porterfield off Trent Johnston. Porterfield ran 20 metres back from behind point and leaned backward to take it close to his chest.

Alexei Kervezee and Tom Cooper steadied the Dutch barge, and the period after the Powerplay was their most productive. From 18 for 2 in five overs, the pair took the score to 72 for 2 in 12 when Cooper made a fatal blunder. Facing O'Brien's first delivery, he spun around to reverse-sweep but missed the ball and was given out leg-before.

At that stage a target of 140-plus was on, but the middle order fell away badly. Wesley Barresi pottered around to make 6 off 16 balls, while Kervezee also struggled to accelerate. The Worcestershire player reached his fifty off 42 balls, but his side were still short of three figures with three overs left. A mix-up led to Barresi's merciful release, but wicketkeeper Gary Wilson was furious that George Dockrell had not thrown the ball to his end where Kervezee was also stranded. The left-arm spinner atoned two balls later by holding a sharp return-catch to dismiss Kervezee for 56.

Peter Borren hit only the second four since the ninth over, but Ireland's stranglehold was never released and a total of 114 for 7 was far below par.

The Irish opening batsmen have twice chased totals in this tournament without requiring help from the rest of the order. The way they started suggested that a third ten-wicket win was on the cards, but with the score on 41 off 4.2 overs, Porterfield got under Pieter Seelar's second ball and was held just inside the rope at long-on. Paul Stirling was dropped next ball by Timm van der Gugten at mid-off.

Before the game there was a ceremony to mark Stirling's 100th cap. It is a measure of how much cricket Ireland now play that the 21-year-old has also missed 41 games since his debut four years ago. He seemed all set to mark the occasion with a fifty, but was trapped in front by Swart, who then induced Wilson to steer the next ball to slip. They were the last two balls of his spell, so there was to be no chance of a hat-trick.

They were also the last two wickets his team would take, as Ed Joyce settled in to play a support role with O'Brien hitting six after six to take the Man-of-the-Match award. He hit three maximums in a contribution of 30 to a stand of 42.

Porterfield paid tribute to Rankin and Johnston. "The way they kept the Dutch batsmen quiet in the first six overs won us the game," he said.

The Netherlands captain, Borren, put the blame for defeat at the door of his batsmen. "The partnership between Alexei and Tom put us in a position to make 140-145 which we would have been comfortable to defend, but we just didn't give them enough support. Full credit to Ireland though, they're a very good cricket team and on today's performance they deserve to go through."