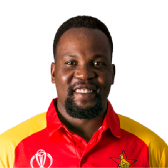 The new year brought in new fortunes for Zimbabwe's bowlers, but not their batsman, as they snatched a 117-run win from Afghanistan in the third ODI in Sharjah to keep the five-match series alive. Their medium-pacers struck from the very first over and allowed a biggest partnership of only 23 runs as Afghanistan were routed for 58 in their chase of 176. Luke Jongwe took his maiden ODI five-for and Neville Madziva finished with 3 for 27 from six overs to dismiss Afghanistan in only 16.1 overs.

It barely looked like Zimbabwe would get anywhere close to victory when they were 49 for 7 after choosing to bat, but Hamilton Masakadza and Graeme Cremer staged a comeback for them, striking fifties and sharing a partnership of 104 runs to help the side move past 150. With a more respectable total to defend, Zimbabwe's bowlers dismantled the Afghanistan line-up, by having most of their frontline batsmen caught behind. Unlike Zimbabwe, Afghanistan could not recover from their score of 47 for 7 and, except for an Mohammad Shahzad, no other batsman reached double-figures.

Strangely, both teams were 0 for 2 and Zimbabwe's recovery was better. Madziva and Jongwe didn't allow the Afghanistan batsmen to breathe at all. Madziva struck off consecutive deliveries in the first over to remove Noor Ali Zadran with a yorker and Mohammad Nabi with a wide delivery which he edged to the wicketkeeper. The other opening bowler and left-arm spinner Tendai Chisoro, who came in for Wellington Masakadza, also chipped in with two big wickets to reduce Afghanistan to 39 for 4.

Shahzad, meanwhile, had done a bit of damage early on to keep Afghanistan alive by scoring 31 of their total of 39 by the sixth over. He used brute force and targeted the leg side for most of his blows before failing in his attempt to clear mid-off and Elton Chigumbura dived forward for a good, low catch. The rest of the damage was then inflicted by Jongwe, who stuck to an asking line and length outside off, extracted good bounce and produced frequent outside edges.

He moved the ball just a bit to make Hashmatullah Shahidi and Mirwais Ashraf edge the ball to Masakadza at wide slip, in the ninth over. In his next over he also had Samiullah Shenwari edge one behind with marginal seam movement to move the ball away and, with the score on 49 for 8, Afghanistan's chase had virtually ended there. Jongwe didn't leave that to anyone else; he got his fourth wicket when Rashid Khan cut him powerfully to cover point and finished things off by strangling Amir Hamza down the leg side, on the first ball of his sixth over. Afghanistan, who had seized the early momentum by bowling beautifully in the beginning of the match, folded meekly in their attempt to convert their 2-0 lead into a 3-0 series win.

Zimbabwe's top and middle order collapsed for the second time in three matches as Afghanistan's new-ball bowlers Hamza and Dawlat Zadran pounced early on by removing the openers in the first eight balls. Left-arm spinner Hamza slid one in from wide of the crease to trap Peter Moor lbw, and five balls later Chamu Chibhabha poked at an outswinger to hand a catch to the wicketkeeper. 0 for 2.

Richmond Mutumbami assisted Masakadza in a stand of 33, but an unnecessary sweep for a ball well outside off resulted in a bottom-edge to the wicketkeeper for 14. Their hopes rested on middle-order batsmen Chigumbura and Sikandar Raza but medium-pacer Ashraf's double-strike removed both of them to leave Afghanistan reeling. Masakadza tried to unsettle Nabi by welcoming him with a straight six in the ninth over but lack of partners meant he had to rely on singles and doubles after that. To deepen Afghanistan's woes further, a mix-up between Malcolm Waller and Masakadza ended in Waller's run-out and they were soon 49 for 7.

Cremer then joined Masakadza and the two responded with a rather unagitated approach. They nudged the spinners around to keep the score ticking, and Cremer also collected fours when Rashid Khan and Hamza bowled shorter to knock the run rate above three runs per over. Cremer's first six, off Dawlat in the 32nd over, showed that the two batsmen were not going to give in. His hook brought up the fifty stand and also the team's 100, and they switched gears further by scoring 36 runs from the 36th to 40th over.

Cremer, though, fell to a full-toss soon after the 100 partnership came up and Masakadza added another 14 to his name before holing out to deep square leg off Dawlat, for 83.