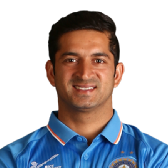 Kings XI will be without Hashim Amla, who scored his second century of the season on Sunday. Amla and David Miller have left for national duties. Either allrounder Darren Sammy or fast bowler Matt Henry is likely to replace Amla, considering Australian allrounder Marcus Stoinis was ruled out of the IPL with a shoulder injury last week.

Robin Uthappa is still being monitored by the Knight Riders medical staff. There's no confirmation on whether fast bowler Nathan Coulter-Nile will be available for selection either.

Knight Riders are tied on 16 points with Rising Pune Supergiant, and are in second place by virtue of a better net run-rate. A win will help them create a two-point gap in the battle for a spot in the first qualifier.

Glenn Maxwell might bowl with the new ball if Sunil Narine opens the batting again - he has conceded only 26 runs in 31 balls against the left-hander in previous meetings, and has dismissed him twice.

However, when he had brought himself on in the Powerplay against Knight Riders in their last meeting, he was taken for 18 runs. To avoid an encore, Varun Aaron's pace and bounce could be utilised instead.