Peter Siddle has lost pace. It was why he was dropped from the Test team - he admits as much himself. But the reasons why he's lost pace are more contentious. Many believe it is because of his vegan diet, but Siddle disagrees.

"People say I'm not as strong. Well, come and watch me in a gym session - I'm stronger than I've ever been," he says. "That is the thing people don't understand. I'm lifting heavier weights than I've ever lifted. I'm moving better. It's just the fatigue. It gets to everyone."

What do you know about tiredness? Maybe you've run a marathon. If so, what did you do the next day? Did you run another one? There's a good chance you're in control of the exercise you do and the rest you get. But what if it weren't like that? What if you were asked to work out while still tired, day after day, for a prolonged period? Do you know what that would feel like, and do you know how long it would take to recover afterwards?

Many believe that after a day off, a player should be over any tiredness, but as Siddle intimates, true fatigue is something more protracted. It is cumulative and builds over time. He points to Mitchell Johnson, who has recently been bowling as quickly as ever but only following a lengthy break. Before that, Johnson's pace had gradually slipped away over several years. 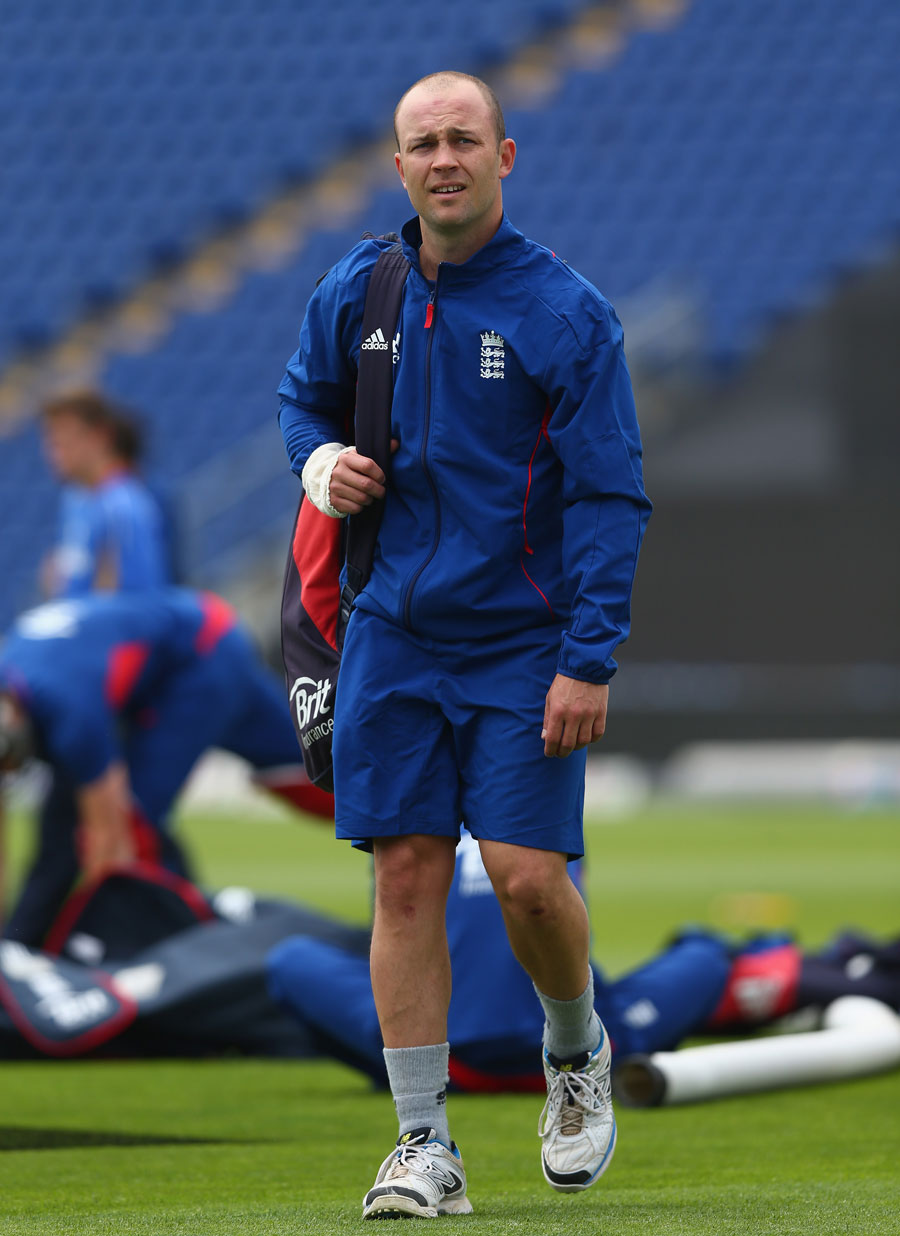 Dr Winsley plans on using Jonathan Trott as a case study for his students. Speaking to Ian Ward on Sky at the start of the summer, Trott described his exit from England's Ashes tour in 2013-14 and listed many of the symptoms Winsley has pointed to as being indicative of an overtrained individual.

"I remember day two or day three, it was a bit of a blur. I was getting headaches and all sorts of things and I wasn't eating properly towards the end and that's when the sleep started getting disruptive and, emotionally, that was probably when I was the worst and it just boiled over."

What preceded this explains a lot. Trott said it built up through the end of the Ashes in England and the ODI series. "The three weeks in between wasn't time off because I was working hard in the nets - two hours, two-and-a-half hours in the nets with Ashley Giles in the indoors, it was pretty relentless."

Winsley says this is a common response to being in a non-functional overreaching state. "Sometimes the mindset of the athlete is: 'My performance has suffered. How do I get back to playing how I was?' And they try and train more."

Last year, there were two Ashes series. Next year has another, and a World Cup. As we see with Trott, these competitions bring increased stress levels long before they actually take place. Even if a player gets a physical rest in between, the mental stresses could well remain.

Cricket is a sport with a known link to mental ill health - David Frith felt moved to write two books examining the sport's alarming suicide rates. Is it responsible to play international cricket without an off season, when that may be a player's best opportunity to get away from the game?

Dr Richard Winsley of the University of Exeter specialises in overtraining, a condition where athletes see a drop-off in performance lasting a prolonged period. While the condition is well known, there isn't currently an agreed definition.

"There's a suggestion that it's a continuum," Winsley says. "The first point would be the fully recovered athlete, where everything's fine. The next stage would be something considered to be functionally overreached. In cricketing terms, this would be where the athlete has played a Test match and you would expect the athlete to be tired for some days afterwards. Within a number of days, at worst a couple of weeks or so, the athlete bounces back to where they were or even better."

This is a basic principle of training. Stress the body and then allow it the time to adapt. But Winsley points out that while some athletes recover quickly, others can take much longer.

"That's termed non-functional overreaching. Performance is lower for a longer period after the increase in training or competition load. Recovery might be something that's with the athlete for maybe two weeks to three months or so."

Winsley believes that while some players can cope with frequent matches very successfully, others might find themselves in a non-functional overreaching state after even a small number of back-to-back Tests. It is an individual thing but the more congested the fixture list, the more likely a player will struggle with recovery.

"Sometimes people bounce out of it. It just takes them two months, six weeks or whatever and then they're absolutely fine again."

But what if it doesn't change?

"If they're presenting with these common symptoms for six months or so, it has gone beyond non-functional overreaching and the athlete would be considered to be overtrained."

The key symptom is that the player's performance is not as it was. This can be subjective in a sport like cricket, where pure physical has less of an influence than it does in other sports. This may go some way to explaining why overtraining in cricket is not more spoken about. It is not quite so obviously debilitating as it would be for a runner, swimmer or cyclist.

Siddle's drop in speed is a clear example of physical deterioration. While he may be lifting heavier weights, fast bowling hinges on strength endurance rather than absolute force. You can get stronger and simultaneously lose strength endurance.

However, Pete Atkinson, the national lead for Strength and Conditioning at the ECB, points out that reduced bowling speed needn't be an example of overtraining - rather the opposite.

"Where we have seen instances of fast bowlers losing pace after an extended competition period, it is often as a consequence of them not being able to train enough. The strength, speed and power work done by modern cricketers builds the engine which enables them to bowl at high speed. Without these underpinning strength qualities the engine can often lose a bit of horsepower."

Such complexities are one reason why Winsley believes it is important to build up a profile with the athlete's coach and clinician. This is no simple task. Over 90 different signs and symptoms of overtraining have been proposed, although some are more significant than others.

"The typical ones you might find are: mood-state change, appetite change, sleeplessness and common cases of upper respiratory tract infections - the cold that just doesn't go."

What happens inside the body of an overtrained individual to hamper performance? Again, it is not clear-cut.

Chronic glycogen depletion is one suggestion. Glycogen is one of the body's main fuel sources for exercise, a shortage of which has obvious implications for physical activity. Altered cortisol levels may also play a part. Cortisol is the body's stress hormone and is involved in protein breakdown; persistently high levels of cortisol lead to a situation where muscles are broken down, not built.

"Players themselves often do not want to be rested. Their international place has been hard-won, and they may feel there is no guarantee they'll retain it, no matter the reassurances. The irony here is that being rested could be a source of stress in itself"

These are profound changes to physiology but in most cases a reduction in training load is all that's needed for the sportsman to return to normal. But this can take several months, and Winsley has seen cases where it may not happen at all.

Atkinson says that he and his team have not detected a pattern of overtraining while working with English players. "The majority of English county pros do between one and three hours of physical training per week with most doing less than 90 minutes in total. If you compare that figure to athletes in sports who routinely do 25-30 hours of intense physical training per week, it is reasonable to conclude that this amount of training, in isolation, is not taxing [the cricketers] too much."

However, he also highlights a fundamental truth about overtraining, which is that it is not just about the training itself. "The biggest risk factor for our players is simply the demand placed on their bodies by playing competitive cricket regularly at a high level."

Atkinson says that he and his team follow advice from the ECB's fast bowling coaches and operate according to the "7-4-2 principle" when managing a fast bowler's workload. This dictates that in any seven-day period, the player must bowl on no more than four days and on no more than two days in succession.

However, while appropriate management of a player's physical workload represents a large part of the puzzle, Winsley's research has found that overtraining is more common at elite levels and he believes that this has a great deal to do with the proliferation of stresses outside of training at that level.

Among non-training stresses, he lists frequency of fixtures, delivering to sponsors' requirements, competition for places, travel, and being apart from family and friends for long periods in foreign hotel rooms away from your social support network - in short, the life of an international cricketer.

While resting a player from a given match will clearly reduce training stress, it does little to address these non-training stresses.

England are due to play at least one match in every calendar month between November 2014 and September 2017. Without an off season, when can a player truly get away from the game? Winsley highlights one particular danger of such a schedule.

"With overtraining we very commonly [know that] the only thing in this person's life is the sport that they are doing." It is a challenge for any player to find a way of getting away from the game when surrounded by cricketers for 12 months a year - even in their time off. It also adds to the challenge later of adapting to life after cricket.

Like many, Winsley suggests that rotation is the solution. However, this is not easy in practice. Team management must meet the playing schedule but also deliver results, and these goals can conflict.

While there will always be some fixtures that are more important than others, can it be stated with any certainty that "must-win games" won't crop up too frequently for a key performer? For selectors and coaches, there is the temptation to field a top player in just one more match. Operating within the parameters of the fixture lists, are they merely doing their best with a fundamentally unmanageable situation?

Compounding this is the fact that players themselves often do not want to be rested. Their international place has been hard-won, and they may feel there is no guarantee they'll retain it, no matter the reassurances. The irony here is that being rested could be a source of stress in itself.

When player, coach, fans and media all want a player on the field, who has the perspective, motivation and clout to say no?