If I ever missed a run-out or dropped a catch while playing for Australia, I would barely sleep that night. It was a worse feeling than not making runs because I was letting someone else down, not just myself. If a bowler was working his backside off in pursuit of a wicket, I wanted to make sure I made the most of every opportunity he produced.

A few Australian players will have been feeling that kind of aching sensation after Melbourne, where an unusually high number of chances went down.

There were some moments of brilliance. The catches Brad Haddin took at either end of day three were as good as you're ever going to see. But there were also others that no one in the team would have been happy about. Brad put one down himself off Cheteshwar Pujara that looked like a chance he would normally have taken. Then there was the one that Virat Kohli offered that split Shane Watson and Brad down the middle after the confrontation that resulted from Mitchell Johnson hurling the ball at the stumps and hitting Kohli.

Had that chance been taken, following the charged chatter between Kohli and the Australians, it would have been unbelievably uplifting for Steve Smith's team. But by going down it deflated everybody, and three hours later Kohli was still batting. The course of the game had changed completely.

It wasn't just in the slips cordon that mistakes were made. Nathan Lyon missed a return catch off Ajinkya Rahane that he will still be wondering about, and Peter Siddle's time on the field as a substitute was marred by a drop off KL Rahul (which was fortunately made less vital when Rahul was dismissed moments later). Run-out chances were also missed.

Fielding, and preparing to field, are things that each player needs to take personal responsibility for. They must ensure they are as well prepared as they can be. If they feel underprepared or lacking confidence going into a game, it is imperative they tell someone on the coaching staff and have it seen to. Whether you are a young man playing your first or second Test, or someone who has played 100, if you feel something is not quite right, you should feel comfortable to stand up and address it.

Like a lot of elements of cricket training, fielding drills can often feel false relative to what actually goes on in the middle. As much as you try to mirror the game, it is impossible to replicate completely. Experience taught me that it was best to set the bar higher in training than in a game - aiming at one stump with your throws instead of three, or doing slip-catching drills as close to the bat as possible. The mental skill of being ready for that one ball at any point over five days is very different to spending 30 minutes knowing you are going to be honing your catching.

Slips fielding, in particular, is a matter of watching the edge of the bat. The wicketkeeper and first slip will be able to track the ball all the way out of the bowler's hand, but the squarer you are, the better it is to focus on the bat the whole time. This means your eyes won't be moving as much to follow the ball and you'll stand a better chance of watching it into your hands.

Shane's drop of Kohli had another factor to it - the unusual dynamics created by Mitchell Johnson's bowling action. He has often caused the ball to swerve and oscillate at weird angles, with the ball sometimes even whirring towards you flying-saucer style, the seam parallel to the ground, seeming to gain height instead of losing it. One such edge swung late in its flight and fractured my left little finger late in the 2010 Perth Ashes Test. In Shane's case, the Kohli edge swerved to his left late in flight, having started on a line closer to first slip. 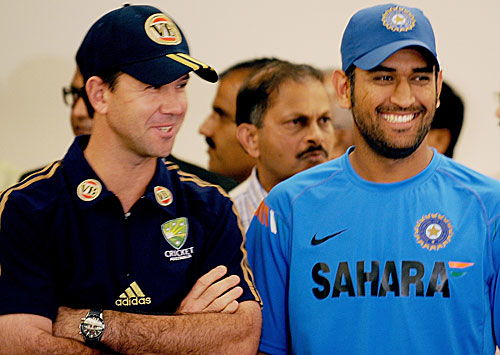 MS Dhoni's decision to retire after the Melbourne Test surprised me, but it was in many ways typical of his understated and occasionally unorthodox years as Indian captain. He didn't mind how it looked as long as he could find a way to reach his destination.

I enjoyed chatting with him, often when we were on hand at the various ceremonies that take place around the international game. He was soft-spoken and intelligent, and his achievements with India across all formats - World Twenty20 winners in 2007, World Cup winners in 2011, and world's No. 1 Test team around the same time - were remarkable.

One thing I had to contend with when facing Dhoni as a captain was how he basically asked opposition batsmen to get a hundred in singles. He'd drag it out so it was necessary to bat for a long time to get there, taking all your boundary zones away. If that meant there were big gaps for singles, he was untroubled, reasoning that his spin bowlers or pacemen would still be capable of bowling a good enough ball to bowl you out. You were often left thinking you would have to hit a magical shot outside your usual zones to score quickly. Added to this was the subcontinental desire to play a waiting game, biding time until the game begins to gather pace on a wearing pitch. He seemed endlessly patient, and I admire him for it.

At this time of summer, most slip fielders will have sore hands from catching countless balls. Training gloves can help here, but only to a point. If you are sore, unfortunately you need to get out there anyway, keep training and drilling until you feel as though you're seeing and catching the ball comfortably. Very few batsmen leave the nets on the eve of a Test until they feel as though they are seeing and hitting the ball fluently, and the same attitude should apply to fielding sessions. It's not just about going through the motions and getting work done.

One mistake in any form of the game can be the difference in a match and therefore a series. We learned that the hard way in England in 2005, where a couple of missed chances ended up making all the difference in the loss of the Ashes. Those misses might also change a career forever. So it is very important that players walk onto the field on day one 100% happy with their preparation.

I don't believe the changes to Australia's coaching panel in this area are a major concern, for all the team's recent mentors have brought different voices and backgrounds but equally strong attributes. Mike Young was never going to teach you how to catch in the slips, but he was great at things like ground fielding, throwing technique, working angles and even tracking high balls in the outfield. Steve Rixon's wicketkeeping background gave him an intimate understanding of behind-the-wicket catching, though he was also very good as a ground-fielding coach. Greg Blewett did a little of both as a player, and has the sort of attitude that the team will enjoy.

One thing that will be missed about Youngy is that the players loved working with him on a one-to-one basis. He never had to chase anyone because they looked forward to it so much. In addition to a good, hard fielding session, there would also be enthusiasm, encouragement - and brash American lingo. Youngy would be willing to stand there all day and work with someone until both were happy, even if it was extra work on top of the usual group drills. For that one half-chance in five days, it was worth it.

When you see teams fielding well, it invariably means their cricket in general is strong. That is why Australia will be eager to ensure that Melbourne is the exception that proves this rule.