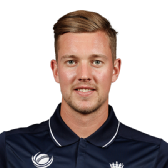 This was not quite the contest which brought the Champions Trophy alive, alas, but England will not lose sleep over that. They became the first team to qualify for the semi-finals with a comfortable 87-win against New Zealand. A grimy Cardiff day during which persistent showers gradually gave way to howling winds demanded application and resolution and they were not found wanting.

New Zealand were in the game as long as their captain Kane Williamson was at the crease, gathering runs with his usual precision. At 158 for 2, they were more than halfway to their target of 311 with two wickets lost and nearly 20 overs remaining. But from the moment Williamson fell for 87 from 98 balls, unhinged by a ball from Mark Wood which reared at him from just short of a length, they looked ill equipped to compete, losing their last eight wickets for 67 in 14 overs.

Match referee Andy Pycroft ruled that New Zealand were two overs short of the target with all time allowances considered.

In accordance with Article 2.5.1 of the ICC Code of Conduct for Players and Player Support Personnel, players are fined 10% for every over failed to be bowled, and the captain is fined double that amount. As such, Williamson has been fined 40% of his match fee, while his players have received 20% fines.

If there is a second over-rate offence committed by New Zealand during the Champions Trophy with Williamson as captain, he will be suspended for one match.

There was little sign of the memorable cricket that characterised the series between these sides in England in 2015, one that signified the start of England's more courageous approach to one-day cricket as they admired how Brendon McCullum would bet the lot and raised him. What there was, was a confident team performance.

England's innings felt like a strain yet with cool heads, at the end of it, they again surpassed 300. They have done it 23 times since the last World Cup, comfortably more than any other side. As New Zealand's bowlers increasingly resorted to short balls, and the umpires stoutly ignoring the showers strafing the ground, it felt like hard work. That hard work persuaded them the score was a decent one.

That proved to be the case on a Cardiff surface that played unevenly at times. After an over in which Liam Plunkett struck both Williamson and Ross Taylor on the helmet, the target looked onerous. He was unfortunate to go wicketless in his first spell, but his menace would not have been missed by New Zealand's tail as they looked on from the dressing room and the last three wickets gained him 4 for 55.

England's seam attack have consistently held that cross-seam deliveries are the way to go in Cardiff and their example is bound to be followed by others.

New Zealand survived an edgy period against the new ball - 22 for 1 in seven overs as Jake Ball (halting his run-up several times because of the strength of the wind) took on the new ball with relish. His first ball bowled Luke Ronchi, foot-fast and amplifying his reputation as a poor starter.

An even more unnerving period came after the loss of Martin Guptill, who drove at a full ball from Ben Stokes and was held by Joe Root in the gully. Williamson was hit on the side of the helmet as he ducked into a short ball from Plunkett, who then struck Taylor on the grille before he had scored with one that spat off a length.

For all that, Taylor and Williamson added 95 in 17 overs and England's disquiet was growing before Williamson fell. Taylor, who has the capability to go from first gear to fifth, never made the transition and three overs later, with 39 from 59 balls, dragged Ball to short midwicket. Jimmy Neesham whacked Plunkett over the long-on boundary, but plopped the next into the hands of deep square leg.

England had omitted Adil Rashid's legspin for their first game, a victory against Bangladesh, but Stokes was held to be fit enough to bowl a full spell again as England's fourth seamer, so with seam stocks replenished Rashid replaced the injured Chris Woakes. He survived the challenge of Cardiff's short straight boundaries, having Neil Broom lbw sweeping and then Mitchell Santner stumped off a leg-side wide, smart work this by Jos Buttler.

In England's innings, the adaptability of Joe Root - England's Williamson and one of three batsmen to pass 50 - was apparent from the outset, his game management in place as he worked the ball around. New Zealand also responded to the unresponsiveness of the Kookaburra - a cricket ball that does not like to party and that makes cricket duller because of it - with a pragmatic acceptance that rewards would be hard won and a shift to a shorter length.

Jason Roy's lack of form remains a problem that England will be desperate he resolves against Australia in the final group match. It is not just the runs; it is his effrontery that so often sets the tone. A record of 47 runs at 6.71 in England one-day matches since his bench-warming exercise at the IPL reveals that impudence is currently in short supply. He survived an lbw appeal first ball from Southee, tried to play himself in, then walked across his stumps twice in one over against Adam Milne and lost his leg stump.

Alex Hales is in better touch. Trent Boult gave him an early opportunity to get his long levers loosened and he hauled the same bowler downwind for six. When he carved Milne over long-off for six more, England were 118 for 1 in the 21st over and beginning to take command only for Milne's slower ball to deceive him as he anticipated a short one.

When Morgan succumbed to an wide ball from Corey Anderson, feathering a catch to the wicketkeeper as he advanced down the pitch, Root, on the verge of fifty, would have recognised the need for a substantial innings. But he was starved of strike during his stand with Stokes - facing only 15 balls in the next ten overs - and he met an ungainly end when he dragged Anderson on to his stumps, envisaging a big shot that never materialised.

Stokes possessed most menace. One straight drive left Root dancing in self-preservation. Twice, Anderson disappeared straightish for sixes and, with Santner's left-arm spin vulnerable - his first five over-spell conceding 36 - there seemed opportunity to feast on the back-up seamers. But Stokes was tormented with a few wide ones outside off stump and, on 48, he had a brainstorm as he ran an uppercut against Boult into third man's hands.

It didn't feel like a day for Moeen Ali, and he soon perished like a butterfly in winter, pulling Anderson to short fine leg where Boult again proved himself one of the more athletic fielders in the fast-bowling fraternity. Rashid fell lbw to Santner as one skidded on a little on a dampening surface.

England needed Buttler's intervention, an unbeaten 61 from 48 balls. His first boundary took 24 balls - and even that, fortunately for him, came via his helmet as Southee fired in another short one in thickening drizzle.

Buttler then ramped a bouncer from Boult into the cameraman's gantry and flat-batted another short ball from Milne back over his head for another six. Rare moments of ambition on a workmanlike day, but by the time Southee ended England's innings three deliveries early with wickets in successive balls enough to swing the match in England's favour. Decisively so, it was to prove.

The win-loss head-to-head in the last ten ODIs between England and New Zealand. In ODI world tournaments, though, NZ have won 6 of the last 7

Tim Southee's ODI bowling average since the 2015 World Cup. In 23 matches he has taken only 24 wickets

Fifty-plus scores for Buttler at a strike rate of 100 or more, out of the 18 times he has topped 50 in ODIs

Instances of England posting 300+ totals, out of the last 13 ODI innings when they have batted first