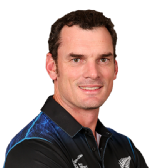 New Zealand produced a remarkable turnaround to level the one-day series with a 22-run victory at Bristol after finding themselves in a seemingly hopeless position. Kyle Mills and Grant Elliott had fine all-round days, while Tim Southee claimed 4 for 38, removing Paul Collingwood with his penultimate ball when the England captain was pushing his side within sight of the target, as New Zealand defended 182. However, that doesn't really do justice to the hole they dug themselves out of.

After 25 overs New Zealand were 61 for 5, which later became 110 for 7, but Elliott, who was pulled out of club cricket with Weybridge before the last match at Edgbaston, batted very sensibly to ensure the overs were played out. Mills' career-best 47 off 40 balls meant they went into the interval with a little momentum and he built on that with two early new-ball wickets, then it was Southee who did the major damage to the middle order as three went down in 18 balls.

Collingwood and Graeme Swann added 65 to edge England back into the favourites position, but Daniel Vettori had an excellent match in the field and marshalled his resources expertly. He took the pressure himself of bowling at the end and sprung a surprise by handing Elliott the ball at the death. The move worked as Elliott claimed the final scalp, which capped a memorable match for him when, a few days ago, he would have been expecting to be playing the Surrey Championship.

With all the discussion about the explosion of Twenty20 cricket, this was a timely reminder that 50-over matches allow plenty of time for ebb and flow. Both teams were in positions where their causes looked distinctly doubtful, but there was the opportunity to turn it around which wouldn't exist in the shortest form. This game was also a pointer that the most gripping contests are those where the bowlers can have a say and it isn't just about whose bat can hit the ball further.

Conditions meant batsmen were never the dominant force with plenty of assistance on offer for the swing bowlers and bounce for taller men like Mills, Stuart Broad and Chris Tremlett. England, though, will wonder how they let the match slip away and while they were slightly lazy in allowing New Zealand to bat out their overs, the target should still have been well within their grasp.

Mills put the run chase on the back foot by removing Luke Wright in the first over and then snaring the key wicket of Kevin Pietersen, a loose flick to midwicket, one of a few England batsmen who helped in their own demise. Ian Bell and Ravi Bopara began to resurrect the innings and New Zealand were desperate for another breakthrough. As so often in those types of situations, it was a brilliant delivery which did the trick as Bell slapped a wide ball from Elliott to cover. Five deliveries later Bopara was equally culpable when he slashed to backward point, although credit must go to Jamie How for a sharp catch.

What may have been a wobble turned into a full-blown collapse in the next over from Southee as he twice found outside-edges into the slips. Owais Shah drove without much conviction, sending a regulation catch to second slip, then Tim Ambrose flashed more expansively and found Ross Taylor, who parried the ball and held on a second time. Southee hasn't had the easiest of tours, following his impressive Test debut where he took five wickets in Napier, but this was a reminder of his talent especially when the ball is swinging.

It left Collingwood trying to pick up the pieces with the lower order for company, in the knowledge that both Swann (against Sri Lanka) and Broad (against India and Sri Lanka) have played major roles in chases during the last 12 months. Swann, after resurrecting the chase, chipped carelessly to midwicket and Vettori knew he had to bowl out England so recalled Southee. The move worked as Collingwood went lbw, then Vettori virtually sealed it as he trapped Broad down the leg side. Vettori's celebrations were a release of tension after a dispiriting few weeks, but also the realisation that his team had pulled off a memorable fightback.

Brendon McCullum departed after taking three consecutive boundaries off James Anderson and no other batsmen threatened to dominate in the same way. When Broad slanted a fuller ball through Taylor's static drive and Daniel Flynn clubbed a thigh-high full toss to mid-on New Zealand were 49 for 5.

Broad was in such metronomic rhythm that he was allowed to bowl his 10 overs straight through and produced the most economical figures of his career. Tremlett, on his recall, kept the pressure on with a miserly eight-over burst and there was a 12-over period where he and Broad operated in tandem that yielded just 16 runs.

However, from the high mark England had set in the field, their standards slipped. A couple of catches were put down - one by Collingwood and one by Ambrose - and while they didn't cost many runs it was a prime example of a moment not being seized. Elliott never threatened to take the attack apart, but his 99-ball half-century allowed a dart at the last few overs, and his stand with Mills added a vital 54 in 10 overs.

Anderson, who had his worst day of the summer with the ball, dropped too short and was dispatched, while Wright also proved expensive as the last two overs cost 32 runs. It is amazing how often such small periods of play end up being the difference. New Zealand have had precious little to cheer on this tour but, against the odds, they head to London for the final two matches with a chance of claiming a trophy.