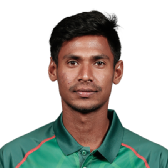 Mustafizur Rahman was the hero in Mirpur again, (off)cutting through India's batting with a six-wicket haul to add to his five-for on ODI debut, and launching Bangladesh to their first ever bilateral series win against India. Mustafizur's 6 for 43, the second best figures by a Bangladesh bowler in ODIs, skittled India for 200, before Shakib Al Hasan steered the chase with a busy fifty, his second on the trot.

With this six-wicket win, Bangladesh also cemented their place in the 2017 Champions Trophy. An overjoyed Mashrafe Mortaza, who has been a part of each of Bangladesh's five victories against India, toasted his team's "big achievement".

Why Bangladesh's target was 200

When the rains came, India were already eight wickets down after 43.5 overs. Because the game was revised to 47 overs per side, India lost out on some batting opportunity, but that loss was minimal as they were already eight down at the time of the interruption. According to the DLS calculations, the batting resources denied to Bangladesh at the start of their innings, compared to what they would have had in a full 50-over innings, was marginally more than the resources India lost out on.

Had India been only five wickets down instead of eight at the time of the interruption, Bangladesh's target would have been 214 even if India had eventually been dismissed for 200. That is because, according to DLS calculations, the potential to score runs in three overs would have been higher with five wickets in hand, than with two in hand.

Mustafizur struck with the second ball of the game, having Rohit Sharma drive away from the body to point for a duck, before coming back to dismiss Suresh Raina, MS Dhoni and Axar Patel in a decisive batting Powerplay that yielded three wickets for 17 runs. When Mustafizur got R Ashwin, he became only the second bowler after Zimbabwe's Brian Vitori to claim five-fors in his first two ODIs.

Mustafizur clapped till his hands hurt and he was mobbed by his team-mates. Mirpur raised itself to a big roar, lapping up its new hero. He would return after the rain break, which caused the target to be revised to 200 in 47 overs, to immediately bowl Ravindra Jadeja via a deflection off the pads.

Bangladesh had a brisk start to their chase, slicing 71 runs off the target in 15 overs. Tamim Iqbal lobbed Dhawal Kulkarni to slip for 13 off 21 balls, Soumya Sarkar was pinged on the badge of the helmet, and there were edges aplenty, but all of it was brushed aside.

Though Soumya was not in fluid touch, with drags and heaves counterbalancing the orthodox drives from the previous game, he added 52 with Litton Das. The spinners briefly helped India claw their way back, Sarkar and Litton falling within four overs of each other. Ashwin, aided by close catchers, preyed on Bangladesh with sharp turn and extra bounce. Dhoni tried to manufacture a game with his spin quartet but Shakib and Mushfiqur Rahim, who was spilled by Raina on 9, assumed charge and added 54 in 9.5 overs.

By the time Mushfiqur was run out for 31, the asking rate was under three, and eventually Shakib 's calculated 51 off 62 balls put the seal on the landmark win with 54 balls to spare.

However, it was Nasir Hossain who had set the stage for Bangladesh earlier. After trapping Virat Kohli lbw in his second over with a skiddy ball to end a 74-run partnership, he beat a well-set Shikhar Dhawan in the 21st over. Nasir went on to complete his quota for only the second time in ODIs, conceding 33 on both occasions.

Kohli's 27-ball stay was an indifferent one. He missed out on a couple of half-volleys and even absentmindedly offered a back-foot defence to a free hit.

Upon Kohli's dismissal, Dhoni hiked himself up to No.4 for the first time since July 2012. He began positively, unleashing a jabbing punch off the sixth ball he faced and sent it blazing through the off-side ring. He followed it with a similar shot for a similar result off his tenth ball. Dhoni and Dhawan then traded caps for helmets and kept the scorecard ticking, taking India to 100 by the 19th over.

Despite the early loss of Rohit, Dhawan was fluent from the outset, lashing four fours on the off side, including successive drives off Mashrafe in the tenth over. He brought up his fifty off 54 balls but perished soon after when he charged down the track to Nasir and edged to Litton, who had taken over the gloves from Mushfiqur for this match. Litton had managed to redeem himself after dropping Dhoni on 20 three balls earlier.

Ambati Rayudu, who replaced Ajinkya Rahane, did not last long and departed for a duck in the 22nd over. Taskin Ahmed and Mashrafe took a cue from Mustafizur and suffocated India further by pulling some pace off the ball.

The visitors needed some breathing space, which was provided by Dhoni and Raina through a steady 53-run stand, only the second partnership of note. However, tight bowling, backed up by predatory fielding meant that no boundaries were scored for a period of 46 balls between the 27th and 35th overs.

The pressure finally told with Mustafizur accounting for Raina off the third ball of the batting Powerplay with an offcutter. By the time Dhoni failed to pick another offcutter and chipped to Sarkar at short cover, India had slumped to 174 for 6. Axar was out off the next ball, bagging his third duck in his last four innings and the third duck of the innings. Ashwin averted the hat-trick but was out nicking behind for four in Mustafizur's penultimate over.

Rain soon arrived at the score of 196 for 8 to hand India a reprieve lasting a little under two hours, but the damage had already been done by Mustafizur.

Ducks for Rohit Sharma in ODIs in Asia; none from 27 innings in India, but 6 from 32 innings in SL and B'desh

Rohit's ODI average in 38 innings in SL, Pakistan, and Bangladesh. In India he averages 65.59

Number of ducks for Ambati Rayudu in ODIs. His three lowest scores in ODIs have all been against Bangladesh

Bangladesh's points in the ICC rankings. They have qualified for the 2017 Champions Trophy