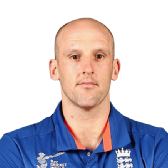 In a campaign of ludicrously slender margins, England gave themselves a fighting chance of reaching the World Cup quarter-finals after emerging victorious by 18 runs in a monstrous battle of wills against West Indies at Chennai. In a contest that fully lived up to the "arse-nipper" billing that Graeme Swann had given it beforehand, England once again teetered on the brink of oblivion before the spin of Swann and James Tredwell hauled them back into contention in a sensational denouement. Needing 244 for victory, West Indies were coasting on 222 for 6, before losing their last four wickets for three runs in 21 deliveries.

It was a finale that would have been remarkable in any other context, but coming from a team that has managed to turn each of its six qualifying fixtures into horror-shows best viewed from behind the sofa through cracks in the fingers, it was a conclusion that teetered towards self-parody. Following a schizophrenic batting performance, in which Jonathan Trott shed his demure image to crash six fours from his first nine balls, England themselves crashed from 121 for 2 to 151 for 6, before Luke Wright justified his first call-up of the campaign with a vital 44. Their eventual total was at least 30 runs below par, but not for the first time, the team's fighting spirit made up for it lacked in planning and application.

West Indies' reply was a tale of three cameos. Between them, Chris Gayle and Darren Sammy slammed 84 runs from 50 balls, while Andre Russell launched his own innings with 45 from 30 before going into his shell after a hugely controversial reprieve on the long-on boundary. While those three were cutting loose, aided and abetted by a string of silent partners, not least the obstinate Ramnaresh Sarwan, it was clear that England had no option but to take all ten wickets to progress.

Cue the spinners - one whose last dew-sodden performance had resulted in an ICC fine for an audible display of petulance; the other whose solitary appearance of the winter came in a forgotten ODI at Hobart back in January. Between them Swann and Tredwell scalped seven of the first nine wickets, including three in the last 11 balls of their allocation, before a sharp throw from fine leg sealed the victory with Sulieman Benn well short.

That it was Trott who delivered the decisive throw was fitting, because it was his superb catch running round at cow corner that looked to have removed Russell for 39 and turned the contest in England's favour at 204 for 7. However, as he landed Trott's momentum slid him agonisingly close to the boundary rope, and though the fielder insisted he had taken the ball cleanly, the third umpire overturned the decision and Russell came back to the crease with six more runs to his name.

It was a moment that might have knocked the stuffing out of lesser sides, but England's bottle is the one aspect of their cricket that cannot be questioned after the events of the past month. Chastised by his let-off, Russell added a further four runs from 16 deliveries before Tredwell, whose three top-order breakthroughs had given England a glimmer, nailed him lbw as he attempted to work a single to leg. One ball later, Benn survived a referral by the skin of his bails as he padded up to a straight one, but England had the bit between their teeth and the desperation to make their opportunity count.

Though Strauss might have been tempted to wait for the tailender Benn to come onto strike, he decided there was no time to wait and unleashed Swann's final over on the well-set Sarwan, who had been in the toilet at the fall of the first wicket but whose belated appearance at No. 6 looked set to seal the game. He had eased along to 31 from 67 balls with scarcely a shot in anger, but Swann's first delivery turned sharply into the gloves, and looped tastily to Ian Bell at a commendably attacking short leg. Two balls later Kemar Roach slogged to Chris Tremlett at mid-off, whose extra height proved invaluable in reaching a low chance, and Bopara's subsequent over delivered the decisive run-out.

The start of the West Indies innings had been scarcely any less breathtaking. With his abdominal strain still appearing to cause him some discomfort, Gayle decided that boundaries, not singles, were the order of the day. He smashed the usually reliable Tim Bresnan for four fours in his second over of the match, before welcoming Tremlett to World Cup cricket in no-less-devastating fashion, with three fours and a dismissive six over wide long-on.

After five overs, West Indies already had 50 on the board, but in a portent of thrills to come, the spinners signalled a change of tempo. Swann's first over went for a tidy three runs, before Tredwell struck with his fourth ball of the tournament, one delivery after Gayle had swatted him for his eighth boundary in 20 balls. Leaning onto the front foot, he was rapped on the pad in front of middle, and a full four years after his maiden England tour, Tredwell finally had his first ODI wicket.

One over later, he had his second, when Devon Smith got in a muddle against a yorker, and allowed Matt Prior to pull off a sharp stumping as he scooped the rolling ball in his right glove. And Tredwell made it three wickets in four overs when Darren Bravo was caught in two minds as he pushed outside off, for Strauss at slip to cling onto a sharp low catch.

Sammy continued to attack the off-colour Bresnan, who switched ends to no avail, before another big six off Tredwell took him to 36 from 21 balls. However, after a relative period of calm, Bopara nailed him via an inside-edge onto the off stump, and the same mode of dismissal then accounted for Devon Thomas, who had been playing the anchor role in his 10 from 20 balls. Though Kieron Pollard played responsibly for his 27-ball 24, Swann eventually got the better of his block-it-or-slog-it approach, and at 150 for 6, the balance of power had veered towards England once again.

It was a scoreline that England themselves would have recognised, for the nadir of their own innings had been 151 for 6, after a calamitous collapse of 4 for 30 in 10.2 overs. All told, it was a batting performance that epitomised England's extraordinary campaign. While Trott was at the crease, caressing boundary after boundary in a 38-ball 47, there seemed no reason to doubt that, at the sixth time of asking, his team would finally produce the command performance that has been so glaringly absent from their efforts to date. But then, when he fell in the 22nd over to a feeble clip to short midwicket, the middle order lost all semblance of direction before Wright's run-a-ball stand of 41 with Tredwell prompted a vital revival.

Devendra Bishoo, the Guyanese legspinner, bowled supremely on debut to claim 3 for 34 in his ten overs, including 2 for 23 in a massively composed first spell of eight off the reel, while the bustling Russell was a constant threat as he mixed boundary balls with wicket-taking deliveries to finish with a career-best 4 for 49. But as they face up to yet another head-scratching post-mortem, both sides may wonder how on earth it came to this. With Bangladesh taking on South Africa on Saturday, and West Indies still to face a daunting finale against India, the tussle for qualification is far from over, even if England have taken their own fight as far as it will stretch.