England's newfound competence in the shorter formats is a tragic waste of a valuable skill that has been developed by scores of England fans: unshakeable resilience when confronted with yet more shame. England have endured plenty of embarrassment over the years and we supporters are numb to all but the most extreme cases. 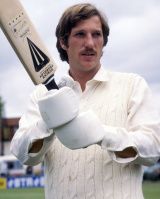 The 2007 Twenty20 specialists
England brought Twenty20 to the world and then they brought them James Kirtley, Darren Maddy, Chris Schofield and Jeremy Snape.

Ian Botham's hair
Any era. Head or facial. Rarely has one man brought so much hirsute shame on the nation. At least he could play a bit.

Ian Botham's armpits
Brown? What was he eating? Why was sweat such a rich mahogany colour in the 80s?

Stuart Broad's looks
Fast bowlers should be hairy and grizzled. They shouldn't look like someone's stretched one of the male leads from 90210.

Peter Such
Somehow he looked like both a granddad and an eight-year-old. He turned the ball less than either.

"The Tail"
Caddick, Mullally, Tufnell and Giddins. Tufnell at 10. Mullally at nine. Six down = all out.

Alex Loudon's doosra
Saying that you have a doosra does not an international cricket career make.

The selection of Darren Pattinson
Not Pattinson himself, but the fact that clearly we'll take anyone.

Alastair Cook's captaincy interviews
Oh dear God, we really are a nation of polite individuals who are happy to automatically bestow power on the nearest posh person.

Jon Lewis' hair
Lewis never played in the same England side as Ryan Sidebottom, so the world was denied a bowling attack that appeared to feature two of the three musketeers.

Ajit Agarkar's Test hundred
A hundred and thirteen ODI innings and three fifties to show for them; 39 Test innings and no fifties. But one hundred. At Lord's.

Anil Kumble's Test hundred
A hundred and thirty-six ODI innings and no fifties; 173 Test innings and five fifties. And one hundred. At the Oval.

Simon Jones' vest
We believe in sleeves in this country. Don't come back out onto the balcony until you've found some.

Nasser saying: "We'll have a bowl"
Did the wheels ever go on? If they did, they didn't manage a full rotation before careering off and killing thousands of innocent bystanders. England lost the first Test of the 2002-03 Ashes by 384 runs and the next two by an innings.