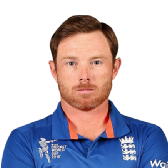 On a cold and overcast day at Southampton, England turned in a heart-warming performance with both bat and ball to thrash India by 104 runs - their third-biggest margin of victory against them - in the first of seven one-day internationals. Alastair Cook and Ian Bell set up the comprehensive victory with outstanding maiden centuries and a 178-run second-wicket stand to push England to 288 for 2, while James Anderson shut off all escape routes for the Indians with a decisive new-ball spell of 3 for 19 in eight magnificent overs - he eventually finished with career-best figures of 4 for 23.

India had started the ODI series as favourites, but the only thing that went right for them today was the toss - Rahul Dravid won it and chose to field, deciding that the overcast conditions would help his fast bowlers, and that the ball would come nicely on to the bat later in the evening.

Neither hunch turned out to be correct: there was little swing or seam on offer in the afternoon, while the extra zip later in the evening proved too much for India's batsmen to handle as Anderson nailed both Sachin Tendulkar and Yuvraj Singh in one over to effectively seal the contest.

England's decision to play both Cook and Bell - and drop Owais Shah - was a bit of a surprise, but it turned out to be an inspired move. India did reasonably well in the early part of the innings, allowing England just 40 in the first ten overs and 88 in the first 20, but that was when Cook and Bell decided to turn it on, putting together the second-highest partnership for England in all ODIs against India.

Before this game Cook had only played five ODIs, while Bell was more experienced only in relative terms, but both batsmen paced their innings as if they were veterans in this form of the game. On a big ground and a slow outfield, they placed the ball in the gaps, ran hard to take all the twos and threes on offer, and thoroughly exposed the woefully sluggish Indian effort in the field.

Cook's was the more deliberate innings, but his calm and unflappable approach at the start was just what England needed after Matt Prior's dismissal in the 11th over. He never strayed far from the orthodox approach, worked hard for his runs - there were only eight fours in his knock - and paced his innings quite superbly: his first 50 took 74 deliveries, but his next 52 came at a run a ball, and included a couple of meaty blows to the midwicket boundary off the fast bowlers late in the innings.

Bell, on the other hand, was all silken touch right from the get-go: his third scoring stroke was an on-the-rise drive through the covers off RP Singh, and that set the tone for the rest of his innings. Against the fast bowlers, he cut, drove and flicked with exquisite timing, while Piyush Chawla was dismantled with twinkle-toed footwork, one straight six over the bowler's head being the stand-out shot.

Both batsmen took full toll of the fifth bowler's quota - Tendulkar, Yuvraj and Sourav Ganguly leaked 79 in 13 overs - and built the momentum perfectly. Kevin Pietersen chipped in with a cameo effort at the end as England finished just 12 short of 300.

A daunting target of 289 needed a solid start from Tendulkar and Ganguly, but they lasted just 15 deliveries before Ganguly threw it away with a sloppy piece of cricket that typified India's performance today: Tendulkar drove Stuart Broad for a single to mid-off, but Ganguly set off for a second run that was never on, and failed to beat a flighted but accurate throw from Monty Panesar.

With the breakthrough gifted away by India, Anderson charged in and shut out any chance of an Indian fightback with three quick strikes. Bowling at around 140 kph, he varied his length cleverly and asked questions of all the Indian batsmen. Gautam Gambhir flashed a drive and nicked to the keeper, while Tendulkar and Yuvraj fell within five deliveries of each other.

Tendulkar might have fallen even earlier, but escaped being bowled when the ball brushed the stumps off his pads but failed to dislodge the bails. His luck ran out, though, when he flicked a half-volley on leg stump straight to short midwicket. Four balls later, when Yuvraj poked outside off and edged to gully, India had slumped to 34 for 4.

From there, it was only a matter of damage control for India. Dravid hung around to score 46 without ever suggesting that the knock would do anything other than delay the inevitable. With Mahendra Singh Dhoni, he added 68 for the fifth wicket before Dhoni fell to an inspired Andrew Flintoff. Playing his first international match in exactly four months, he charged in, bowled consistently at around 145 kph, beat the bat, induced edges, and finally got Dhoni to glove a pull to the wicketkeeper for a painstaking 60-ball 19. Dinesh Karthik added a spunky unbeaten 44, but was also involved in two shambolic run-outs as England completed an utter rout.