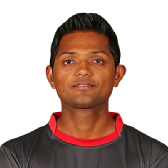 UAE captain Amjad Javed slammed a 42-ball 79 and then picked up two wickets, as the hosts edged past Scotland by nine runs in the only T20I in Dubai.

UAE, opting to bat, were pegged back by regular blows from Safyaan Sharif, who claimed a career-best 4 for 24. However, despite wickets tumbling at the other end, Javed laid into the Scotland bowling, his maiden T20I half-century featuring five fours and sixes each. Javed's blitz left UAE staring at a total in excess of 150, but three wickets in the last over meant the hosts were restricted to 148.

Scotland, though, failed to gather any momentum in their chase and soon stumbled to 49 for 4 by the eighth over. Preston Mommsen kept Scotland's chase alive by stroking a much-needed 52, but received very little by way of support from his team-mates, as the visitors could only muster 139 for 9. Javed (2 for 19) and Mohammad Naveed (2 for 16) claimed two scalps apiece.