<
>
1st unofficial ODI, Zimbabwe A tour of Bangladesh at Fatullah, Sep 28 2014
Zimbabwe A won by 17 runs
Player of the Match 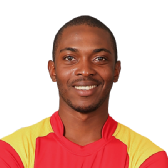 Regis ChakabvaZimbabwe A
1st unofficial ODI, Zimbabwe A tour of Bangladesh at Fatullah, Sep 28 2014
Zimbabwe A won by 17 runs
Player of the Match

Regis Chakabva's maiden List A century helped Zimbabwe A to a 17-run win over Bangladesh A in the first one-day match in Fatullah. This is the visiting side's first win on tour after going down 2-0 in the two-match unofficial Test series.

During his stay, Chakabva added 83 for the opening wicket with Brian Chari, 42 with Timycen Maruma for the third wicket and 120 for the fifth wicket with the captain Vusi Sibanda, who struck 52 off 67 balls with four boundaries and a six.

The home side were dealt an early blow when Abul Hasan, making a comeback from a back injury that put him out for 18 months, had to go off after bowling just 2.5 overs due to a neck injury. Legpsinner Jubair Hossain and Mominul Haque took two wickets each.

In reply, Bangladesh lost most of their top order by the 11th over, after which one of the openers, Soumya Sarkar added 63 for the fourth wicket with Naeem Islam. Sarkar made 56 off 80 balls while Islam top scored with an 85-ball 66 that had five boundaries. Islam added 56 for the fifth wicket with Mosaddek Hossain who fell short of a fifty by just one run.

He added 70 rapid runs for the seventh wicket with Elias Sunny but once the latter fell in the 48th over, Bangladesh A had a mini-collapse that stalled the momentum created by Sunny and Mosaddek and ultimately cost them.