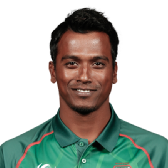 Williamson won't come out to bat as he has injured his thumb and isn't in a position to come and bat. How many of you expected this turnaround after Corey Anderson started to wield the long handle after the rain break?

His spell after the break read 3.5-0-10-5 and that hat-trick. If that doesn't happen to be among the best spells by a Bangladesh bowler, I don't know what would be

McCullum, New Zealand captain, says, "We were in for a good game of cricket. Bangladesh recovered well after being three down through a good partnership. Getting a hat-trick is an achievement. Rubel was outstanding. We have two games to go in the series and we need to win them to win the series. We allowed them, Rahim and Naeem, to get away and get that partnership going. Our middle order didn't contribute today"

Rahim, Bangladesh captain, says, " I thought the wicket was tricky and it wasn't coming on to the bat. All credit to Naeem who came in and performed straightaway. Rubel was amazing. I would like to dedicate the win to Sheikh Salahuddin and his family members"

Rubel Hossain, expectedly, is the Man of the match. We can't publish what he is saying as he is speaking in Bengali.

Thanks for all your comments today and join us day after for the second ODI. Till then it's a good night from all of us here

29.5
W
Rubel Hossain to Elliott, OUT, fuller ball on the off stump. Elliot lofts and how fitting is it that Mashrafe takes the catch, a brilliant catch, as his record is the one that Rubel equals for the best figures by a Bangladesh bowler. Brilliant spell by Rubel, five wickets in it

28.6
1
Abdur Razzak to Elliott, 1 run, retains the strike with a push to the leg side