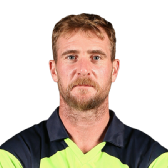 Zimbabwe wrapped up the series with a three-wicket victory in the second ODI on Tuesday but Mooney starred first with the bat - making 55 to help Ireland recover from 128 for 6 to post 244 - and then by taking two wickets to give the tourists a token win. On the cusp of victory Ireland were given a scare through an entertaining final-wicket stand between Shingirai Masakadza and Ian Nicolson but it proved not quite enough for the home side.

For the third time in the series Elton Chigumbura won the toss and inserted Ireland into bat and it again looked the right move when Ed Rainsford burst through the top order - removing Paul Stirling, Andre Botha and Niall O'Brien in his first four overs to leave Ireland tottering on 40 for 3.

Among the wreckage Ireland captain William Porterfield stood firm and found support from Kevin O'Brien to halt the slide. Zimbabwe, however, kept control through their spinners Graeme Cremer and the impressive Prosper Utseya, who finished with 1 for 26 from his 10-over spell.

Cremer removed O'Brien before Porterfield was run out four short of a deserved half-century to leave Ireland in trouble. In keeping with the fluctuating nature of the series, Ireland fought back with Andrew White partnering Mooney in a 66-run stand for the seventh wicket as Ireland scrapped towards a competitive total.

Rainsford, who was man-of-the-match in the opening contest, returned to break the stand before trapping Albert van der Merwe in front to finish with 5 for 36 but Mooney held firm until he was last man out in the final over, finishing with two fours and two sixes in his 55.

Zimbabwe would have felt confident at the half-way stage having twice chased similar totals in the previous games but perhaps with the series in the bag the batsmen weren't as switched-on as they should have been.

Kevin O'Brien completed a miserable series for Hamilton Masakadza, dismissing him for a fourth-ball duck to go with his 8 and 0 in his previous two innings before trapping Brendan Taylor in front in his next over.

Sean Williams and Tatenda Taibu threatened a comeback with an enterprising 70-run stand but Mooney made the key break through, castling Taibu for 22. Thereafter the Ireland spinners took control. Van der Merwe had Williams caught by fellow spinner George Dockrell for 74 off 86 balls before Dockrell ran through the lower order, picking up 3 for 41 to leave Zimbabwe 164 for 9.

What looked like a formality for Ireland suddenly became a struggle as Shingirai Masakadza found support from No. 11 Ian Nicolson. The pair added 60 at better than a run a ball before O'Brien returned to remove Nicolson and leave Masakadza stranded unbeaten on 45 off 49 balls.