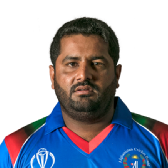 Afghanistan completed a miraculous revival to secure their passage to the World Cup in England next year with a five-wicket win over Ireland in the final Super Six match of the qualifying tournament in Zimbabwe. Afghanistan lost their group games to Scotland, Zimbabwe and Hong Kong and entered the Super Six with no points, but victories over West Indies, UAE and Ireland - as well as helpful results in other games - meant that their World Cup dreams came to rest on their final match against Ireland. Chasing 210 on a slow track, Mohammad Shahzad led the way with a rapid fifty before Asghar Stanikzai, who missed the group stage due to an emergency appendectomy, secured the result with an unbeaten 39.

Shahzad, who had been suspended from taking part in Afghanistan's last two group games after picking up a demerit point in the team's loss to Zimbabwe, quickly showed what his team had been missing in his absence. Despite the sluggish pitch, he made scoring look easy and his first boundary came from a remarkable pick-up six over long leg off a Barry McCarthy half-volley.

In his second match as an opener, Gulbadin Naib was the perfect foil to Shahzad's more rambunctious style. Having started in Afghanistan's lower-middle order, Naib has slowly moved upwards and today he wore the responsibility of opener well. Foregoing all but the safest of shots, together with Shahzad he ensured Afghanistan got through the first 15 overs unscathed.

At the other end, Shahzad kept the scorecard ticking. Having seen the shine off the ball, he launched the attack on Ireland's spinners, and moved through the forties with a series of boundaries. Andy McBrine was clubbed to wide long-on, and then onto the roof of the three-storey building at the City End of the ground. Shahzad brought up a 48-ball fifty in the 17th over, but then played one shot too many and was caught in the deep off Simi Singh in the same over.

That dismissal gave Ireland the opening they needed to start working through the middle order, and by the 30th over Afghanistan had added just 31 runs, losing Rahmat Shah and Gulbadin Naib along the way. Simi had his third wicket when Mohammad Nabi dragged a ball to McBrine at deep midwicket, and at 145 for 4 in the 38th over, Afghanistan were wobbling a little.

They had been in a very similar position in their match against Zimbabwe in Bulawayo earlier this month, but this time around there was one crucial difference: their captain, Stanikzai, was at the crease. With the required rate creeping above seven, Stanikzai helped take 15 off an over from McCarthy, and he responded to Samiullah Shenwari's dismissal with an ice-cool dab to the third man boundary off a slow bouncer from Tim Murtagh. Stanikzai was clearly in pain all the while, clutching his side after every big shot or every hard-run two.

Najibullah Zadran narrowed the gap between Afghanistan and World Cup qualification to single figures with an enormous six that landed at the top of the grand stand, but fittingly it was Stanikzai who brought them home in the last over. Jamming his bat down on a McCarthy yorker, an inside edge sent the ball skidding down to the fine-leg boundary, and Afghanistan's incredible revival was complete.

For Ireland, a tospy-turvy campaign ultimately ended in disapppointment. Having decided to bat , they adopted a slow and steady approach in the morning. Openers William Porterfield and Paul Stirling had both scored hundreds in this tournament, but neither was at their most fluent on Friday. Under heavy, grey skies on a slightly tired pitch they managed just 37 from the Powerplay, despite Stirling taking three boundaries off Dawlat Zadran.

At the other end, Porterfield accumulated his runs with more substance than style, and his dismissal - chipping an attacking stroke in the air to a fielder inside the circle - set the tone as, with the pitch slowing up, catches tended to go to fielders in front of square inside the circle.

Stirling brought up a 77-ball fifty in the 28th over while Niall O'Brien, bucking the trend of laboured scoring, raced through the twenties with a flurry of boundaries, including a confident swipe over long-on off Nabi. The pair had put on 44 in under 10 overs when a horrible mix-up resulted in Stirling's dismissal for 55. Niall O'Brien reverse-swept to backward point, Stirling set off for a stop-start single, but then turned and dived for the crease - but by then the ball had been thrown to Mujeeb, who whipped the bails off with the batsman well short.

Three overs later, Niall O'Brien drove Zadran low to Shenwari at extra cover, and Ireland were looking a little rudderless at 130 for 4. Simi struggled to get the ball off the square as Afghanistan's multi-faceted spin attack circled like sharks, but Kevin O'Brien struck three fours and a six in his 41 to help Ireland take 66 off the last 10 overs. Their total of 209 for 7 was modest on paper, and left Afghanistan with plenty to do in these conditions. But having been living on a prayer throughout the Super Sixes, Afghanistan weren't about to fall at the final hurdle.