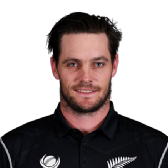 A blistering 52 off 28 balls from captain David Hussey helped Nottinghamshire end their Friends Life t20 hoodoo against Lancashire at Old Trafford. The Outlaws had lost the six previous meetings between the two sides at this venue but they chased down 156 with 14 balls to spare to win by four wickets thanks in the main to their Australian captain.

The 35-year-old is only one of three men to have scored over 5000 Twenty20 runs and he shared a crucial fourth-wicket stand of 78 in just 7.3 overs with opener Alex Hales, who made 49 off 37, to take the visitors within sight of victory.

Nottinghamshire even survived an historic performance from New Zealand fast bowler Mitchell McClenaghan, who claimed Lancashire's first ever five-wicket haul in this format. McClenaghan struck with his first ball on his home debut and later had Hussey and Hales caught with successive legitimate deliveries at the start of the 15th over to give them a glimmer of hope.

But it was too little too late as Nottinghamshire made it two from two in the early stages of their North Division campaign.

Lancashire recovered from the early losses of Stephen Moore and Ashwell Prince as they slipped to 22 for 2 in the fourth over after losing the toss. Moore was run out following a mix-up after just six balls and Prince caught in the deep off Ajmal Shahzad in the fourth over.

Steven Croft and Simon Katich, who added 52 and 48 respectively, then shared 93 in 11.2 overs for the third wicket to get their side back on track and up to 115 for two after 15 overs. But they lost four wickets in the last five overs to halt any momentum gained.

Nottinghamshire fielded superbly with five catches in the deep, the best of which came from diving New Zealander Ian Butler at long-off to get rid of Tom Smith at the end of the 18th over off the excellent Harry Gurney, who finished with 1 for 18.

Lancashire had their noses in front with the visitors at 50 for 3 in the seventh over of their chase but Hussey, in particular, and Hales took the game away from them. Having got Michael Lumb and Riki Wessels early, McClenaghan snared Hussey, Hales and Chris Read. The visitors weathered the storm, though.