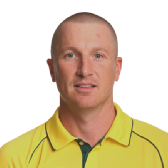 Australia's influx of youth has dominated discussion of late, but it was the team's mainstays who completed a successful series-salvaging mission at the SCG. Brad Haddin's maiden one-day international century was complemented by half-centuries to Michael Clarke and Michael Hussey, propelling Australia to an intimidating 9 for 301 that proved just beyond the grasp of the hard-finishing New Zealand.

The hosts appeared set for a comfortable victory at the fall of Tim Southee's wicket in the 37th over, but a brilliant partnership of 69 from 49 deliveries between Grant Elliott, who struck 115 from 124 balls, and the injured Brendon McCullum (36 from 27) raised hopes of a stunning upset. McCullum, playing with the assistance of a pain-killing injection after hurting his shoulder in the field, punished Nathan Bracken from the uncustomary position of No. 9, while Elliott adopted a more measured approach in compiling his maiden limited-overs hundred.

Elliott, however, holed out to Michael Hussey off the bowling of James Hopes in the 45th over to effectively end New Zealand's surge. McCullum followed in bizarre circumstances - his bat flying to midwicket, the ball to wide mid-off - and Jeetan Patel fell with 15 balls remaining to seal a 32-run victory for Australia that ended an inglorious five-game losing streak.

McCullum's brave decision to bat could cost the team in the days to come. He had been struck a serious enough blow standing up to a rearing Kyle Mills delivery for the team management to call in Gareth Hopkins as cover for Tuesday's match in Adelaide. McCullum, the vice-captain, will undergo scans to the damaged right shoulder on Monday, with his availability to be determined the following morning.

McCullum's opposite number, Haddin, experienced vastly contrasting fortunes at the SCG. Haddin may have been overlooked in the Indian Premier League draft last week, but proved immensely valuable to Australia's embattled limited-overs unit with a brilliant innings of 109 from 114 deliveries defined by clean, straight hitting and authoritative footwork.

Haddin became the first Australian batsman to post a one-day international century since June last year, and his timing could not have been more opportune. Faced with a second consecutive home series defeat, Haddin - in just his fifth appearance as a limited-overs opener for Australia - combined with Michael Clarke (64 off 69) for a 135-run opening stand that set a solid foundation for a large total.

Haddin, 31, batted watchfully in the opening exchanges and accelerated over the course of the afternoon. He blasted Daniel Vettori for a straight six upon reaching 90 and, after a few nervous moments stationed on 99, completed his hundred with a single off the bowling of Tim Southee. Haddin was eventually run-out from the second ball of the batting Powerplay, but not before he had confirmed his status as a pariah to New Zealand. Widely criticised for his controversial role in Neil Broom's dismissal in Perth last week, Haddin added to the tourists' frustration with the bat.

Australia might well have posted a more imposing total if not for another middle-order tremor, but a brisk sixth-wicket partnership of 62 between Michael Hussey (51 off 32 balls) and Callum Ferguson (28 off 23) still allowed the hosts to pass the 300-run barrier in an ODI for the first time since the tour of the West Indies. With the SCG wicket showing signs of holding, the run-a-ball target always appeared a difficult ask.

New Zealand's run-chase began poorly when Martin Guptill (6) and Ross Taylor (4) were dismissed by Bracken and Ben Hilfenhaus respectively inside the first six overs. Taylor was most unfortunate to have been adjudged lbw by the umpire Steve Bucknor to a delivery he appeared to edge, somewhat negating the earlier incorrect leg-before decision awarded against Ferguson.

Wickets fell at a steady clip until the union of Elliott and McCullum. Their entertaining stand enthralled the SCG crowd, but fell short of their ultimate objective of leading New Zealand to a series-sealing victory.

For the Australians, the victory provided the comforting feeling that normal programming had resumed - even if that programme was tape-delayed by Channel Nine into Queensland, South Australia and Western Australia.